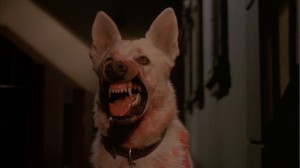 Towards the end of his career Samuel Fuller made what is perhaps his most well known and accomplished film in The Big Red One, a tale of soldiers during World War II starring Lee Marvin. Some called it the greatest war film ever made. The trouble with many artists is that they don’t know when to walk away after a masterstroke, but for Fuller it paid off. Though he went on to make a couple of films of no real note, just two years after the release of The Big Red One came his fiery take on the still lingering racism present in the United States. White Dog was withheld from release initially in the US, the topic highly controversial but Fuller draw’s the subject into the open and presents it in a dynamic and, dare I say, animalistic form. It was a late-in-the-day swipe from a filmmaker full of confidence.

It all begins in a slightly tacky way; aspiring actress Julie Sawyer (Kristy McNichol) is driving through the California Hills when she collides with a white Alsatian. After taking the injured dog to a veterinary clinic she brings it home and begins to form a bond. The fairytale is nicely interrupted by the deft use of Ennio Morricone’s tension heightening score as it plays over Julie’s frolicking with the dog. As she takes picture after picture, Fuller’s telescopic and frenetic camera work begins to suggest something altogether more sinister than this scene portrays.

Two events then begin to highlight the dog’s troubled past. Both times Julie defends her dog, which earlier saved her from an intruder, 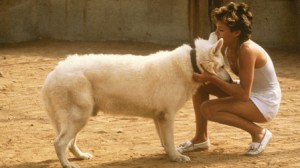 even though it appears to be a savage beast intent on attacking blacks. Her denial is a damning indictment of white rejection of racism. After much coercion she does however seek out animal trainer Keys (Paul Winfield), an African-American who makes it is personal mission to cure this ‘white dog’ by inviting its hatred upon him.

The electricity of the film is heightened to its potent best once Keys and his partner Carruthers, played by a superb Burl Ives, come onto the scene. Carruthers delivers a heartfelt and condemning speech to Julie as she considers the fate of her dog. We see Keys trying to slowly break the dog, intense, lung-bursting scenes of energy laced perfectly by Morricone’s score. Keys’ crusade to cure the dog of its anger becomes a vehicle to ask questions about racism in the US. The subject is difficult to discuss and Keys’ constant struggle with the dog depicts a man living with resentment every day. When the dog escapes to murder a man in a church; the cleverly placed iconography 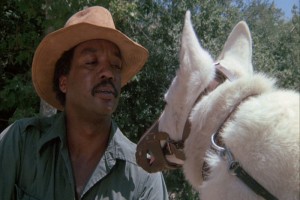 illustrating the part religious dogma had to play in many killings of African-Americans over the years.

Though there is trust breeding between the two, there is always a fear for Keys’ safety. Is it really possible to teach an old dog, not new tricks but to alter its entire mindset? Julie’s brief meeting with the dog’s real owner is Fuller’s answer to that question shortly before the final climatic scenes where it will be revealed whether or not Keys’ work paid off. Fuller’s most daunting question remains to the very end, one at once powerful and elusive. Can we change these last remnants of racism by force of will?

White Dog is released on DVD and Blu-Ray on the 24th March courtesy of Eureka! Masters of Cinema series.