Many comparisons have been thrown at young director Anthony Woodley’s film Outpost 11, from The Thing to David Lynch and 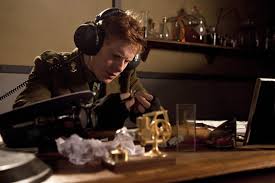 even to one of Woodley’s major influences David Cronenberg, particularly his iconic film Videodrome. Great praise indeed. Two more could easily be tossed into the mix, there are echoes of Kubrick’s The Shining and 2001 as well as faint resonance of Duncan Jones’ superb Moon. While any filmmaker would be delighted to draw such lofty associations they may also wonder if they are doing anything unique, are they just mimicking others. Of course this is partly true but what makes Woodley’s work unique is the unparalleled poise with which he draws from many sources but brings them together to do something that is quite unlike just one of them. Though Outpost 11 is far from perfect, not quite the accomplishment it certainly hints at the potential for, the comparisons to such enigmatic and exceptional peers show Woodley is in the right company. This early on in his career he is being likened to greats of the medium, if he keeps course he could one day find himself in their company being described as a contemporary instead of youthful potential.

First of all though Woodley must work to fulfil the promise that Outpost 11 exudes but fails to live up to, the wordless seven and a half minutes opening sequence is immediately intriguing with a high level of composition quality. However from here small plot and performance points begin to eat away at the overall work and drag it down somewhat. The plot is inherently mysterious; Woodley 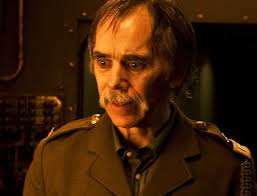 brilliantly focuses on a central point but has many branches that call into question any revelations validity. The superb recasting of history by embroiling Britain in a second one hundred year war against the Prussians is right out of the sci-fi handbook, allowing him to employ strange technologies but the plot’s lack of depth of explanation of many key areas does often lead to a very muddled perception of the gravity of the situation for the men station in Arctic Outpost 11. Though not giving anything away allows Woodley to keep his viewer ultimately fixed on every detail, the mix of the psychological and grotesque horror elements, undoubtedly garnered from his love of Cronenberg, often leave the plot devoid of any real meaning and thus the subsequent events feel weightless, sometimes unimportant.

The three men involved in the story spend every day trying to intercept enemy signals but have been isolated for quite some time without any communication. All three are very well constructed; Mason (Luke Healy) is the commander, a good man who looks out for his comrades but has become disillusioned with their mission, spending most of his time hunting. Albert (Joshua Mayes-Cooper) is a young private, a conscript who just wants to be home from this war that has consumed his life. Albert is bullied constantly for being weak by the eldest of the group; war hardened Graham (Billy Clarke). Graham is a survivor from the first war and has been demented by conflict; he begins the downward spiral of insanity that will devour the group. Despite these characters being perfectly combustible for this confined environ the dialogue repeatedly lets key scenes become very stilted. The delivery from the two elder actors is frequently more suited to the theatre, often expressing a point to the back of an 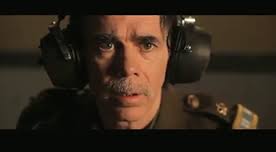 audience hall that doesn’t exist. These two points combine to remove any real chance of haunting subtlety that this kind of film thrives on. Woodley does however keep the tension up with ambiguity as to what is the key threat to his characters, though there is more work needed to make us care more about their survival, the multiple mystery tour of their surroundings does enough to keep the viewer insatiable.

The aesthetic of Outpost 11 is truly where Woodley and his crew do their best work. Everything apart from the frozen exterior is imbued with a bronze/copper hue. The dark lighting and the mesmeric movement around the cabin that is laden with guns, knives and some less than well intentioned arachnid companions give the film a nightmarish quality with only the sharp sounds and mechanical score to stop you falling head first into the lurid dream. Though low budget, Woodley shows himself adept adding quality without the cash by displaying a talent for rich frames and flowing sequences that will allow many to forgive the plot in its moments of more preposterous excess. 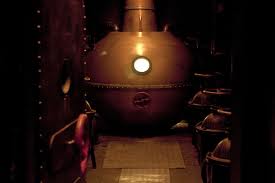 Though Outpost 11 has only just received its festival bow Woodley has proven to be no slouch, starting principle photography on his second feature with production partner Healy in October 2013. Talent and hard work can only prove to be a successful combination and the duo may find themselves looking back on Outpost 11 as something of a good stepping stone. Being lauded at the Raindance Film Festival in London is a good start but the film does lack in a resolute clarity, possibly something that will come with more experience. Woodley never lets his mystery become completely solved but also peppers it with moments of silliness that mock the more serious aspects of the film. He does however bring it together in an ending fitting of the greats he has been compared with, proving that it is ok to waiver midrace as long as the finish is strong.

Outpost 11 is Now available on DVD