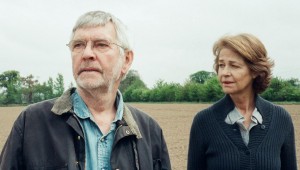 Andrew Haigh’s assured second film begins with a fracture, a break in routine. Kate (Charlotte Rampling) and husband Geoff (Tom Courtenay) walk their dog, greet their postman, and receive a letter. In this compact, unassuming feeling setup, a series of unhurried medium shots; Haigh cleverly creates a mood, a tone and a sense of a place, as well as the suggestion of a relationship that has existed long before the camera started observing it – as well as swiftly delivering a point of departure from this lived-in familiarity.

Reading the letter reveals that the body of Katia, Geoff’s ex-flame who died in 1962 – 50 years prior to the arrival of the letter and 5 years before the union of Kate and Geoff – has been discovered, frozen solid under ice, preserved in the state she was at the point of her death. Whilst in the extended interim, Geoff, and by extension Kate, have been worn by the passing of time; Katia’s image and memory, long lost in the annuls of history but now somehow re-awakened on some level, has remained suspended.

From this rupture, a seemingly innocuous surfacing of a detail in a history long since forgotten, plays out a relationship drama that shuffles between high and low keys, the introduction of a complicating element introducing a sense of imbalance to a union that had seemed unshakable. Despite having shown a preference for representing young gay characters on screen, (in his debut Weekend and his contributions to HBO series Looking) Haigh demonstrates a marked comfort in channeling the feelings of something presumably more disparate from his own experience. 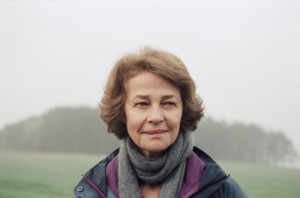 It’s a wonderfully tender film, anchored by a subtle, nuanced script from Haigh that provides lots of room for Rampling and Courtenay to work around. Honing in on the trivial and circumstantial as much those moments that which might, with hindsight, seem the pivotal ones, Haigh builds the conversational wireframe of a relationship that his actor’s faces fill out, a shared lifetime expressed in bodily gestures, extended warm glances and knowing looks.

Rampling in particular is excellent, given a majority of the film’s screentime to build a character that veers between being the strength of the relationship, a calm, assertive more youthful counterpoint to Courtenay’s increasingly fragile, agitated and distant husband. Perhaps the greatest compliment that can be paid to a film about a relationship between two characters who’ve been married so long is that this feeling, that of time spent together and experiences shared, is palpable in the character’s interactions with each other.

At points, 45 Years feels a little too much like a play. Though certainly well photographed and featuring consistently great sound design, (whether in the whirr of the slide projector in the loft, the various calls of nature in the garden sequences, the suffocating quiet of the interior scenes in their isolated home, or the sparingly used diegetic soundtrack cues) the film is a low key chamber piece set across only a few, mostly indoor locations. Not much then perhaps – bar one terrifically cinematic, Hitchcockian, horror-inspired loft set piece that falls at the dead centre of the film – that couldn’t exist as well on the stage.

As both characters respond in various ways to the new, slowly revealed information and its manifold complexities, the viewer’s sympathies and understanding of the dynamics of their relationship and individual personalities shifts along with Haigh’s mannered, incisive presentation of these varying slices of a shared life. 45 Years is rife with ambiguity, but not the lazy ambiguity many inexperienced directors can resort to, instead of a type that encourages viewer involvement and ensures differing readings based on personal perspective. Down to the final scene (one of the best, most defining concluding shots since that one in Christian Petzold’s Phoenix), Haigh constantly wavers back and forth in his presentation of information, visual and verbal, always careful to not reveal his hand too much as to what he believes to be the most important.

Proving himself as apt at dissecting the latter stages of a relationship in 45 Years as he was at charting the unknown terrain of a newly forming one in Weekend, Haigh confirms himself as one of the best British filmmakers making films pointedly not about kitchen sinks, council estates, scrapyards or abusive paternal relationships. Let’s hope with his third feature, he can diversify his outlook even further, and remain as preternaturally talented behind the camera as he has proven himself so far.