Some tales were made for the black and white era. The German folk tale of Faust has many incarnations, most notably Johann Goethe’s play, but F.W. Murnau’s film brings another dimension to the centuries old fable. Goethe’s words and expansion of the premise are undoubtedly the most significant of the appropriations but there is no denying the film has a part to play in bringing to life the more fantastical elements, Murnau using the medium’s tools to bring Faust to life like no other has ever managed. 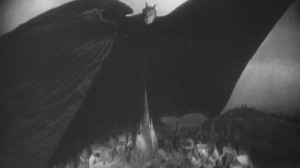 Dark disturbing scenes open the film, murky clouds swirl as the Mephisto (Murnau favourite Emil Jannings) and an angel (Werner Fuetterer) make a wager over the soul of the elderly professor Faust (Gosta Ekman). The film’s script is a melding of Goethe’s, Gounod’s and more particularly Marlowe’s but each frame belongs to Murnau, his meticulous work is evident in every scene and Timothy Brock’s orchestral score captures the mood of the doomed souls, the battle between good and evil, heaven and hell. 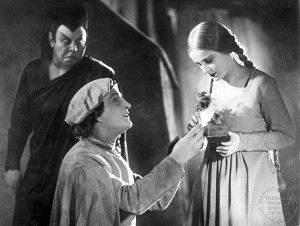 The tale of moral compromise to get what you want is full of dread but there are lighter moments as Jannings depicts Mephisto in a playful light, albeit a devious one, his overemphasised actions are indicative of the silent era, the scenes of romance between Faust and Gretchen (Camilla Horn) are particularly out of date but a wonderful glimpse into the past. In the end the resonance of the tale is unmatched by the ageing of the work, Murnau bringing Faust’s and mankind’s redemption to an emphatic close.