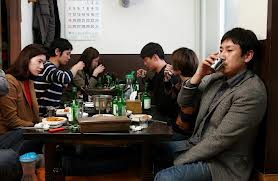 It would be very easy to be blasé when considering a synopsis of this film, the key arc being a student/professor relationship that is at once passionate and fractious. It’s been done, to death. Yet writer/director Hong Sangsoo finds real life, reviving this possibly staid narrative by adding a subtle depth of story and using narration to instil an idiosyncratic and often dreamlike view of the world from title character Haewon (Jeong Eun-Chae). There are no broad strokes offered in Sangsoo’s film, just delicate revelation, the talented writer preferring a more invested watch than a story where every detail is excessively explained. A quiet and meditative presentation of modern relationships and the understated yet accumulating difficulties of modern life, the nomination for the Golden Bear at the 2013 Berlinale was well deserved.

Haewon is introduced as a female student actor who lives in a village on the edge of the bustling South Korean capital Seoul. As the film begins we learn that Haewon’s mother is leaving for Canada and despite their recent distance this begins a period of reflection and emotional development. Through quirky, offbeat but edifying conversation we learn about both characters and enjoy a touching opening segment as mother and child contemplate their futures and what it will mean to be on different shores.

Via Sangsoo’s voyeuristic camera style we learn of Haewon’s affair with one of her professors, Director Lee (Seon-gyun Lee). 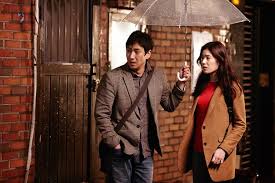 Impassioned conversation reveals the depth of the affair, Lee being deeply in love with the brave and beautiful Haewon but remains married and unwilling to let people see them in public. People are magnetically attracted to Haewon but it leads to some of her friends criticising her out of sheer spite. She is a character so magnificently written that it is impossible to tell at which point you began to love her, or at least empathise with her. A young woman trying to find where she belongs in the world whilst battling the attentions of men of all ages willing to say whatever it takes to get what they want, she can seem flippant but with so many carefully structured meetings and conversations Sangsoo removes all doubt of her innate inability not to care about people.

Sangsoo is one of the most revered directors in South Korea, his visual style only demands attention. Often completely static as scenes unfold the camera suddenly moves to focus on something significant, or not, to end the scene. It is as if Sangsoo is spying on his characters from the bushes using a telescopic device, a scene may start slightly too wide before being sharply drawn in close to gaze more intently at the subject. In the same way the scene can start to close before a sharp widen to reveal more of what is going on, 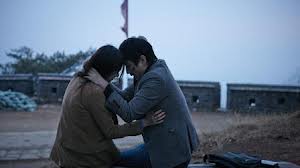 Sangsoo’s timing for these moments is impeccable often stopping scenes from becoming tiring if the dialogue has been unravelling for some time which is common in his very wordy script. While many of these conversations are integral to the narrative and hold a very serious tone, Sangsoo cleverly inserts day dreams into the story, perhaps to give a bit more authority to Haewon’s view of the world around her. These moments also help jolt the viewer from merely watching into question and pondering the meaning of events, a wonderful trick indeed.

Your eyes may well play tricks on you as Haewon’s story untangles but trust in Sangsoo to bring it all together neatly. He nimbly knit’s engaging narrative with existential questioning and downright jaw-dropping unreality. The feeling of being allowed access into Haewon and her friends, family and lover’s lives is electric. The narration, while often unnecessary, provides another angle by inviting us into Haewon’s unique world view and asking: “do you agree?” While not quite revelatory or ground-breaking enough to cause much stir among the cinematic community, Nobody’s Daughter Haewon certainly shows that simple cinema can prevail and in fact, it’s not always that simple.

Nobody’s Daughter Haewon is released in Cinemas on October 11th and will be available on DVD on November 4th courtesy of Studiocanal.