Weird Adventures continues the BFI’s mission to unearth, restore, and celebrate the moving images of Britain’s past. This DVD release contains three hour-long tales made by the Children’s Film Foundation. The CFF was set up by the Rank and Odeon cinema chains to make homegrown entertainment for kids to see at the ‘Saturday morning pictures’. 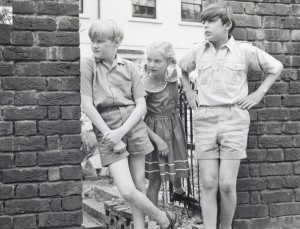 First up in this collection, and the earliest from 1961, is The Monster of Highgate Ponds. This film is mainly notable for the talent behind the camera. It was produced by Halas & Batchelor, founders of the hugely influential animation studio most famous for creating Animal Farm (1954), and directed by globetrotting Brazilian Alberto Cavalcanti. The story features an explorer uncle who returns from his travels with an unusual egg and leaves it in the hands of his nephew David. But the egg hatches, the eponymous monster is born, and run of the mill hokum ensues.

You can see the appeal for younger kids and early animated shots give this monster charm. Unfortunately he is more often shown as merely a static rubber doll that grows up to become a man in a clumsy rubber dragon suit. Clearly time and money restrictions were a problem and there is little of the craft and invention you would expect from this team. In fact this piece may have worked better as a short animation, making the most of Halas & Batchelor’s skills and giving Cavalcanti a break (he apparently spent half the shoot with head in hands declaring “Gods gif me patience”). 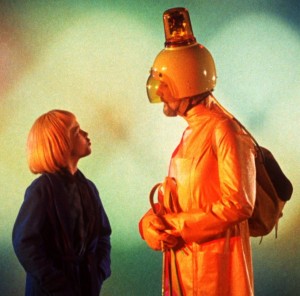 Next up, and the stand out film here, is The Boy Who Turned Yellow a late reunion for the brilliant duo Michael Powell and Emeric Pressburger. This tale is enjoyably bonkers involving as it does a mouse called Father Christmas, the Tower of London, and a boy whose tube journey takes a turn for the surreal. After turning yellow our hero John is guided by Nick “As in electronic”. A flashing light on his head and a pair of yellow skis on his feet, Nick is played with gusto by the appropriately named Robert Eddison (think Kenny Everett in a yellow mac). Escorting John via electricity this character has much in common with the similarly flamboyant Conductor 71 in Powell and Pressburger’s masterpiece A Matter of Life and Death.

A Hitch in Time completes this collection and features an intrepid pair of kids who ignore a danger sign to venture inside a castle and discover a time machine. Its inventor is Professor Adam Wagstaff played by Patrick Troughton (best known as Doctor Who). Like a polite TV version of Time Bandits this film flies through time and plot with dizzying speed. A parping soundtrack and sheer momentum distract from the educational tone and dodgy child acting.

All these films set out to ignite the imaginations of young minds introducing the extraordinary into familiar landscapes while also giving work to underemployed directors. If only Nicolas Roeg, John Boorman and Mike Hodges (to name a few) were given the same opportunity today to inflict wonder and invention with carefree abandon.

‘Weird Adventures’ is out now