If there was ever an actor that matched the heft and expression of a Leyland truck it was Victor Mature, so who better to star in The Long Haul, a trucking thriller that combines US noir with British dour.

Mature plays Harry Miller, a demobbed American GI keen to return to US apple pie but persuaded by his English wife to settle instead for the grime of Liverpool. Here he’s hooked up with a driving job at her uncles haulage firm and the problems begin. 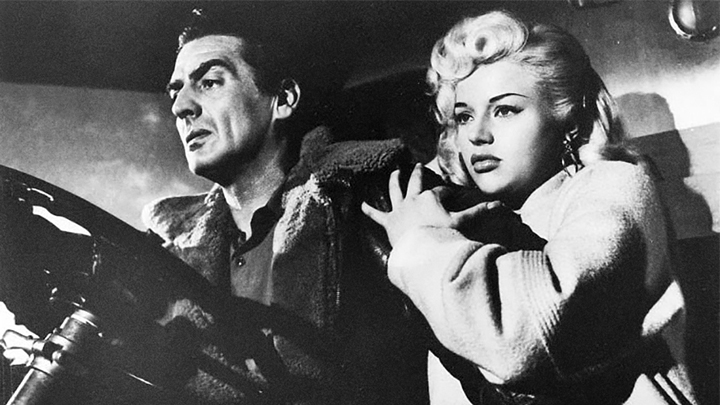 So Victor drives his truck, trying to steer a safe course between the irresistible pull of Diana Dors’ platinum locks and the corruption of her kingpin boyfriend Joe Easy (played by Patrick Allen channeling Robert Ryan). This is an unabashed B-movie where Mature’s strangely appealing lunk is paired with Dors who here, as ever, is more than a perfect pout. The script provides the required fights, lust, and exotic delights (the Congo Club! a gay character!) but often seems uncertain of its destination veering wildly towards its conclusion (although this does include a bizarre truck variant of Fitzcarraldo). However, Ken Hughes deft direction adds much to proceedings including evocative locations, unusual character actors and a musical score by Trevor Duncan (who also did sublime work on La Jetée) that is both slapdash and full of ideas to add depth to these thinly drawn characters.

Coupled with Hell Drivers from the same year (where Stanley Baker was the truck), The Long Haul provides a peak into a British genre that never quite stuck and provides cheap thrills for anyone who likes their chips with gravy and their movies full of pulp, sweat and lipstick.

‘The Long Haul’ was shown at BFI Southbank as part of their Projecting The Archive strand.