Another oddly fascinating collection from the BFI this DVD comprises eleven ‘cinemagazine’ shorts made for South and Southeast Asia.
Each is around 9 minutes in length and features a mix of items flagged up as “People – Places – Events” but generally focussing on manufacturing processes, modernisation and people standing about smiling.

Initially the most striking aspect is the pin-sharp image quality and Technicolor stock. For a collection of 50-year-old films they look brilliant, the vibrant colours bringing life and wonder to often banal events. 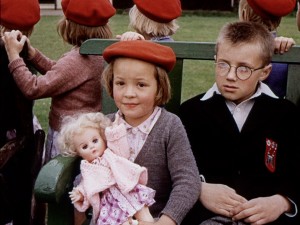 The jolly tone and globetrotting format make for an optimistic blast of soft propaganda. We’re heading into a brave new world where technology means a happier future for us and our foreign friends. Funded by the Central Office of Information and the Foreign Office these films jump from New Zealand to Laos, Cambodia to India, but always stop off to see how things are done here in the UK.
At times it can feel like watching a Wes Anderson film where neatly attired ambassadors shake hands with obedient locals in colourful surrounds.

Brian Cobby’s light-footed narration expertly skips along providing gentle delights as he segues between random items: “No, that’s not tea, that’s bubbling oil – another of Asia’s most valuable products”. Accompanying Cobby is music that plays on the exotic landscapes and relentless machinery with the casual ease of a lounge jazz band.
And so we drift into this world often not realising that we have travelled thousands of miles in the blink of an eye.

While primarily of historical value there is also something innately fascinating about watching processes in detail. Whether it’s the printing of stamps, the construction of a food mixer or the manufacture of rubber there is a satisfaction in seeing the invention and ingenuity used to sustain our modern lives.

Although much is made of the striving towards mechanisation, 1963 is still a time where people are an important component in the machine and human graft is never far away from the production lines and flashing lights. Time has been kind to these films with any lulls in pace or less than exciting events countered by the charm of glimpsing a pre-digital age where abacuses are used with frightening speed.

Roundabout: 1963 – A Year in Colour is the equivalent of a cup of tea and piece of cake round your Nan’s; it may not sound exciting but you’ll enjoy it and might just learn about another world a lot like our own but seen in beautiful bright Technicolor.