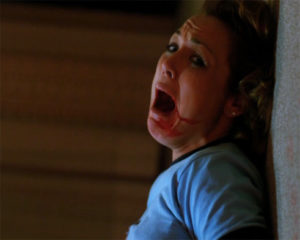 Slashers were literally finished for the second time when KOLOBOS was released. The slasher end game saw this 1999s film undervalued. Not totally undervalued but treated less respectfully then it deserved. A severely wounded girl is found uncounciouss and rushed to hospital. When asked what has happened, she utters the word “kolobos”. Days earlier, an advert in the paper asks for volunteers for a special project that is taking place. This is where the same girl, named Kyra (Amy Weber), has agreed to take part in it. It is an experimental film about people and their enviroment. Her, alongside four other people she is living together in a house filled with camera’s and microphones. They must stay there for three months, day and night. Lunch, dinner Breakfast and so forth. While the cameras record everything. Big Brother with more interactions and a real space. However as they all relax, a killer stalks the house. Slashing and killing anyone that is in the house. 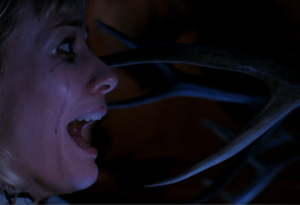 The truth about KOLOBOS is not that it was made at the wrong time. Revisionist horror films were all the rage. SCREAM had stormed to success, I KNOW WHAT YOU DID LAST SUMMER and  FINAL DESTINATION all played with form and nodded to older, better films. KOLOBOS was just to far down the line, unbalanced in promotion and contained a lot of the sardonic, film school elements, unfamiliar with the audience at the time. Now some 20 years later, we know more about the genre and I mean in the sense of its incarnations from international climbs. Now audiences understand what is on offer. So the touches of Italian exploitiation cinema, flashes of convention bending and I really liked how it tickles the horror bone but also is tongue firmly in cheek with a parody of the film school, student film maker. All of this aside, KOLOBOS does fail to match the highs of other films made at the time. It is less creative, less compelling and MY LITTLE EYE executed the whole better.

FIRST PRESSING ONLY: Fully illustrated collector’s booklet with new writing on the film by Phillip Escott