The Perks of Being A Wallflower DVD Review 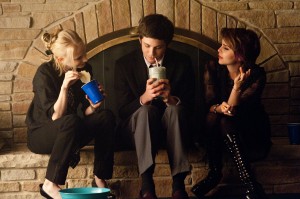 I may have come a little late in the day to The Perks of Being A Wallflower, but I have to admit that I am glad I came late rather than never for this was the most emotionally compelling piece of cinema I have seen throughout 2012.

Directed by Stephen Chbosky from his own book written in 1999, Perks, follows Charlie (played by the extraordinary Logan Lerman) as he is about to start as a freshman at high school. All the usual tropes of an angsty teen drama are present; from indie music, to quiet musings out of windows, particularly clever students surrounded by idiots, close friendships with tutors and sitting alone at lunch time and yet something about Perks makes it seems so much more real.

(The day I am writing this review, I have just finished the penultimate episode of Josh Schwartz’s, Gossip Girl, which for the past six years has excited me on a weekly basis due to it’s pure escapist, captivating and exciting drama. *note from theatrical release) This is one sort of teen drama (although they aren’t anymore) at it’s best; bitches were really bitches, money wasn’t an issue and all the guys were jocks. But The Perks of Being AWallflower is another sort of teen drama, the sort, which is usually overshadowed in favour for the more escapist kind. This represented (despite it’s gleam and glamour, it’s a Hollywood movie regardless) a reality, which can be respected and understood by virtually anyone. We all have teenage years and we all have our moments where life seems to kick us while we are down; so why not pay more attention to the films, which highlight these issues.

Something else, which is particularly interesting about Perks is that it appears to understand that teenagers can have mental health issues, they can deal with depression and anger but they can also lead perfectly ‘normal’ lives with friends and families. Although, at the end of the day, who are we to say what is ‘normal’? And really that is one of the cruxes of this film – the characters are constantly evaluating what it means to wake in the morning and lead a life, which to everyone else looks normal but really underneath our exteriors, we are breaking down.

Charlie’s friend killed himself a year before the film is set, this we know from almost the start of the film. What we don’t understand until right at the end is the nature of the relationship that Charlie has with 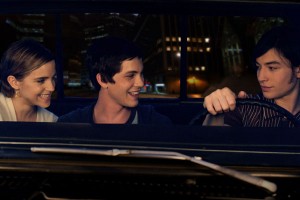 his aunt, apart from the fact that we know she is no longer alive. Through the film, Charlie has flashes of memories of his aunt. The film, here, is questioning the nature of memory and whether when we look back onto parts of our lives it begs us to ask, do we rose tint what came before? Although things may have been hard of enjoyable, what is the use of remembering these horrible things, instead we manipulate our memories to make us think the best of the past.

As Charlie starts high school, he is quiet and alone but also brilliantly clever and a keen writer, as realised by his English teacher, Mr Anderson (played by the somber Paul Rudd). Anderson soon starts to give Charlie extra assignments out of the class and gives him some of his favourite books to indoctrinate him into the intelligentsia. All the while this is happening, Charlie meets Patrick (played by Ezra Miller in my favourite role of his), an openly gay senior who just wants to enjoy life whilst he is living it and his step sister, Sam (played by Emma Watson, in a way, which makes you ask Hermione who?). Sam is beautiful, she is talented, she is loving but she is also truly fucked up and really this is what the film is basing it’s narrative upon; the truly fucked up side of all of us.

Patrick and Sam introduce Charlie to their friends, the outsiders, and the group quickly immerse Charlie as one of their own. Their love for ‘old’ indie music includes The Smiths, New Order and Dexys Midnight Runners and this shapes the rest of the film up to the first of many intimate moments. At one point the three are sitting in Patrick’s van, when ‘the tunnel song’ comes (for those in the know, it was ‘Heroes’ by David Bowie) and they each become highly excited at how free they feel. Whilst driving under a serenely lit tunnel, Sam stands up, hands in the air and lets her body go with the music. Watson here, shows that she has left the Harry Potter days behind and is a new woman. She lets her body move, hair take grace and sways in time with Bowie. 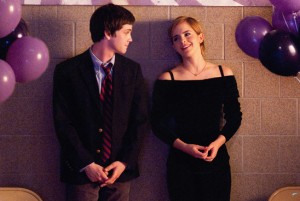 As far as performances go, Lerman (who I have never seen before) surely is one of the runaway actors of 2012 portraying the massively hurting Charlie with such confidence and self assurance that (I certainly) one becomes so affected by what is going on in his brain, and that you want to be with him every step of the way. He brings you in and makes you want to discover what is going on with him and why he is in the state he is. What has made him get to this place? The other side to Charlie, is his deep love he holds for Sam. It’s beautiful to watch this teenager fumble with his words and sexuality to get around to finally telling Sam how he actually feels. There is not one moment in the film, where he feels exaggerated or hyperbolic.

In terms of the performances from the other two stars, Watson and Miller have very quickly become seasoned faces of this new generation of actors that we are seeing on the big screen and Perks has only further illuminated their roles to come. They are both perfectly outrageous when necessary and bounce of each other perfectly, as if they were real siblings.

All in all, I would say that Perks is the best teen drama of the year, and perhaps one of the most real dramas I have seen in the cinema in ages. It’s beautifully filmed, with a choice soundtrack telling a real and necessary story.