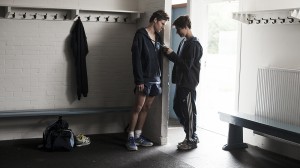 Boys (Jongens) is a coming of age story by Dutch director Mischa Kamp. It tells the story of Sieger, played by Gijs Blom, an adolescent track runner who is put on the relay team with three other boys. Sieger immediately notices fellow runner Marc, played by Ko Zandvliet, and from that moment can’t stop looking at him although at such a tender age he doesn’t quite understand why.

Boys follows the traditional coming of age set up, the first fifteen minutes or so are dedicated to watching Seiger as a playful youth. Along with his friend Stef they are seen riding their bikes, chasing each other and talking to the local girls- albeit if a little uncomfortably on Sieg’s part. There are lots of stolen glances at Marc that are obviously leading up to something, so when the two are swimming in a lake and they first kiss you aren’t surprised, all though it is an agonizingly aesthetic shot.

Broms’ flawless performance as Sieger stands out across the film. At such a close age to his character you can see that he is able to draw on his own teen angst and use it to portray the dilemma of Sieger’s feelings. Being a teenager is confusing enough but to be able to channel that to such a standard says that he is definitely one to watch out for.

When Sieger is talking with the girls, he comes across as clumsy and unsure, as would any boy at that age. It’s when you see him talking to Marc that you see Blom’s talent as his clumsiness is immediately replaced with an awkward uncertainty when in Marc’s presence, as though he is resisting the magnetic pull of Marc. After the first kiss though Sieger shuts himself off from Marc. He is shown with a conflicted look on his face but before we know it he has followed his brother to a local hangout to find the girls so that he can be ’normal’.

Free spirit Marc however seems to know exactly what he wants throughout the film, Sieger. Marc is the catalyst in Sieger’s life that opens up his sexuality, which 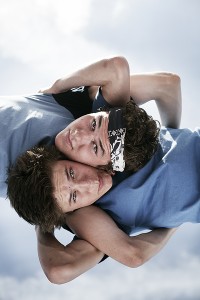 is obvious from the first time the two are in a shot together on the running track. The quiet, reserved Sieger is drawn to Marc, who does handstands when he should be training and entertains the campsite singing on a guitar, even though he has eyes only for Sieger whilst he sings. Unfortunately this also means that he is the victim as Sieger’s denial is constantly at Marc’s expense, especially in the second half of the film where you start to wish Sieger would get over himself already and spare the poor boys heart.

Melle van Essen’s camera work throughout Boys is simply stunning. She uses seagulls against the night sky to look like moving stars as the boys stare into the night whilst wrapped up in each other’s arms. And not to mention the incredibly symmetrical shot for the boy’s first kiss, she definitely deserves a medal or something shiny. Her diverse range of techniques helps to move the film along at a steady and comfortable pace, the woman needs to stand up and take a very deep bow.

Boys is an all-round breath of fresh air, as it is a coming of age story it doesn’t focus on sexual tension between the two boys, but more on the experiences they are having with each other. They are at such a tender age that all they need is a few fleeting kisses where they don’t even use tongues. They are at the cusp of all that other monkey business gay cinema is known for. It’s not about two guys skirting their feelings for each other until someone gets bent over, it’s a tale of discovery, of growing up and coming to terms with who you are. It’s the kind of film that makes you want to be fifteen again so you can run away to Holland and kiss boys. By using actors at such a young age Kamp has captured the characters perfectly, their on screen connection carries the film from start to finish resulting in a wonderful, gentle piece about first love.