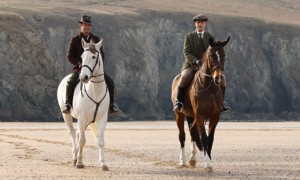 Christopher Menaul’s Summer in February is based upon the 1995 novel by Jonathan Smith, which concentrates on a group of artists called the Lamorna Group, who were based in Cornwall during the early 20th century. This bohemian group included Alfred Munnings (played by a very out of place Dominic Cooper), who in 1944 was elected president of the Royal Academy of Art, Laura Knight (a scene stealing Hattie Morahan) and Harold Knight (Shaun Dingwall). In their own private world, these artists and their friends lived by their own rules, finding art in everything they looked at and always working to make sure they get better and better. But that was during the day, when the evening’s came, the drinks would be served and everyone would enjoy themselves and their lives.

Based upon a true life romance, this group of intellectuals and artists find themselves at the centre of a love triangle between Munnings, his friend Gilbert Evans (playing the same role he previously played in Downton Abbey, a confident Dan Stevens) and the girl that both their hearts were lost to, the delightfully boring and bland, Florence Carter-Wood (‘one expression’ Emily Browning).

Whilst each of the three has their own stories to tell, Summer in February wasn’t quite sure what to concentrate on first. The story itself is a 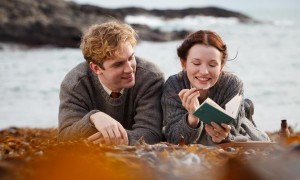 little known one, both in terms of the Lamorna Group and this time period before the First World War  and the ways in which it may or may not affect those down in Cornwall. Therefore this film really had a chance to reach into the richness of the history upon which this story is based and explore each of the characters; their quirks, their nuances and the reasons for their being but instead the film is a rushed collection of moments, highlighting several incidences in the triangular relationship. Although the first act of the film is a slow but more succinct exploration of those who live and partake in this life, where Menaul takes his time to set the scene and establish the setting, the latter acts almost forget to go any further beneath the surface, where we lose many of the supporting players and end up concentrating on the main three leads. The film remains much more interested in a ‘he said, she said’ sort of scenario, with a rather clunky script. One of the biggest issues about the love storyline in the film is that it is hard for the audience to believe that two educated men such as these really would fall so terribly hard for someone like Florence, who in this film is really quite dull. 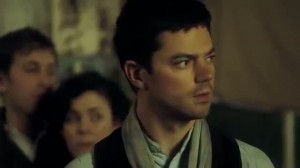 It is certainly not a difficult watch because of this, but it is certainly one of the downfalls of this film. Munnings was blind in one eye, something that is rarely considered in the film and it could have been much more interesting to put Cooper through his paces and try to get the audience to empathise with the character, but instead he comes across as a pompous prick who gets what he wants otherwise he throws the toys out of the pram; for this reason, he was uncomfortable to watch. Browning’s character, Florence, was seriously mentally disturbed, something that is only really considered when she tries to commit suicide (an act that reoccurs and acts as quite harsh bookmarks for the film) but instead is played as a boring, middle of the road women who is stuck between the art she wants to do and the men she is in love with. There is to an extent a small dialogue about independent women but instead, it really does boil down to whether she is going to be with Munnings or Evans; both of whom really don’t seem all that desirable. This leads swiftly onto Dan Steven’s character, Gilbert Evans, who is actually makes complete sense to end up with Florence because they are both as boring as each other. Although Cooper stood out in the film and not for the right reasons, he at least played a character with a bit of trauma and this was certainly portrayed. Evans is a middle of the road character who really isn’t that far a cry from cousin Matthew in Downton Abbey. By the end of his tenure of Abbey, at least Matthew was coming out of his shell and became a little more than a man trodden on by everyone around him but Steven’s seems to have simply returned to that character and backstepped; this really doesn’t bring him too much out of his comfort zone and although he plays the role very well, it would have been better to see something different.

Despite all this, the film is admittedly a very good looking one, filled with wonderful Cornish landscapes and beautiful imagery. Menaul has done a rather stellar job at capturing the emotions of the world around these characters but for some reason it really doesn’t translate particularly well to the characters themselves. Summer in February is not a particularly interesting or riveting story but there’s lots of outdoor painting and nudity, which should be enough to make the art enthusiasts happy amongst the audience. The cinematographer, Andrew Dunn, who is best known for 2001’s Gosford Park and the production designer, Sophie Becher, allow the film to have a wonderful period feel. But really who cares when the story is as boring as this.