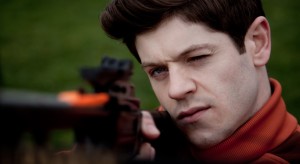 One of the main reasons that The Rise can exist is pretty much due to the star talent of the film; what Rowan Athale has on his hands is a mixture of the some of the most popular young stars in British cinema and television and mixed them together with one of the genres that traditionally British cinema does best; gritty crime. By bringing them together, there is a small hope that a new wave of young fans will make the transition and continue to uphold the British throne. Unfortunately this is no Get Carter, The Long Good Friday or Lock, Stock & Two Smoking Barrels. Instead The Rise is a well structured, well acted but slightly overdrawn crime drama, which doesn’t really warrant repeat watchings but is certainly entertaining in the first instance.

The story follows Harvery (an always pitch perfect, Luke Treadaway) who has just come out of a year in prison, where he believes he has been set up by a local drug runner, Steven Roper (the scary Neil Maskell). Along with his three best friends – cum – brothers, Dodd (Harry Potters Matthew Lewis), Dempsey (Misfits Iwan Rheon) & Charlie (Shameless‘ Gerard Kearns), they put into motion a plan to exact their revenge on Roper and intend to get away with it. The film is structured through a large flashback as the audience are initially introduced to Harvey talking to D I West (Timothy Spall) after his arrest from the showdown with Roper, who is currently in hospital. The film occasionally goes back to the present, to the small, alienating cell where Harvey is telling his story to the interested and intrigued officer.

The plan is to set Roper and his goons up; ultimately Harvey wants to hurt him but not before carefully calculating an intellectual and precise plan 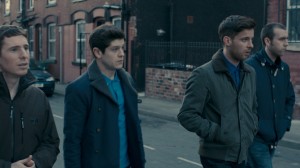 about how the guys are going to do it. The vast majority of the film is the planning and honestly, in parts, it gets a little too precise and a tad confusing and convoluted. Other secondary characters are introduced to the audience who provide a piece of information here or there, but nothing that the film could have done without. There is even small bursts of emotion between Harvey and his girlfriend, who were together before he went to prison as well as between Charlie and his sleeping mother. This all leads to a rather satisfactory and average conclusion… or does it? Once the audience and West have been led to believe that the story is wrapped up and that Roper is due to be arrested for much larger crimes, Athale’s tale takes an unexpected and rather exciting twist, which proves that Harvey’s plan was much more detailed than the film had previously told. When everything is truly revealed at the end, it suddenly becomes clear why there is a feeling that things have been held from the audience and the complete story had in fact not been told. Whilst for the vast majority of the film, it seems a weakness, it does come full circle by the end.

What The Rise also tries to do is subvert the genre by adding a slightly slapstick heist, Oceans 11/12/13 element. Unfortunately the film is a little too self aware about what it is doing to completely pay off & Treadaway and crew are certainly no Clooney etc. But that being said, the four main characters do work very well together; they bounce off each other and appear as if they really are great friends. Treadaway is truly fantastic, contemplative and nuanced, the audience never quite know what he is thinking. Rheon, stands out a little and not for a good reason. Whilst he is a great upcoming actor, his accent was a little thick and in your face, which made it a little uncomfortable to listen to but nonetheless, he was still entertaining.

In terms of the look of the film, it is impressive. Despite the fact that there are just a few locations in the film, there is never a moment of boredom with the surrounding and Athale is quite a capable director in making his space seem interesting. There is also some really rather beautiful looking sequences; near the start of the film Harvey is explaining the local drugs trade step by step and the fast cutting montage is really quite snappy and intriguing to watch accompanied by Harvey’s narration. Furthermore the sequence of the final showdown in the lead up to the revelation is also really great; the use of colour is great as the oranges of the lights and the rain create a tense atmosphere.

The Rise is as if someone put Oceans 11 and The Inbetweeners Movie into a pot, added some more guns and a little good ol’British violence. It’s a well made drama, not quite edge of your seat tense but entertaining enough.