There is something magical about THE PEANUT BUTTER FALCON. Directors Tyler Nilson and Michael Schwartz are navigating a course, well traversed and equally, well defined. Something of the American dream, as seen through the guise of the American novel. Legendary charecters, sometimes blocked by the chargin of life. Linking it to Twain and Bellow’s THE ADVENTURE OF AUGIE MARCH. Defused with dreams of what is America and the road best travelled to arrive there. For some that means very different things to others. Here it means a voyage of dicovery…

Zak (Zack Gottsagen), is 22-years-old. Living in a retirement home in North Carolina and has Downs Syndrome. Eleanor (Dakota Fanning) is his carer and looks after him the best she can. Zak however wants out. Who wouldnt. He dreams big. He dreams of becoming a professional wrestler, going to wrestling school and meeting his hero the Salt Water Redneck. One night he sneaks out of the home and stows away on a small fishing boat for the night. The boat is owned by Tyler (Shia Labeuf), a fisherman and thief. He is surviving after the death of his older brother. When Tyler burns $12,000 worth of equipment on the docks of two bad guys, Duncan and Ratboy, he flees for his life. He stole from them but they are far from nice guys. Finding the boy in his boat, he takes him in. Desperate to get out both of them travel across the US, to get to Florida and hopefully, freedom. 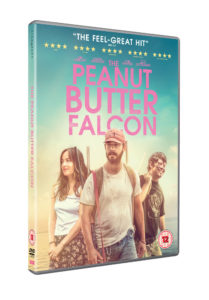 We could speak of the genesis of this film. Zack Gottsagen being discovered in a disability programme in the US by Labeouf. This inspiring the idea of a film which handles disability as not a hinderance. Instead I want to look at something else. Slowly, ever so slowly, THE PEANUT BUTTER FALCON crawls along the sun soaked American landscape. Never looking to push aggressively, its themes, ideas or narrative. The slow churning power of the film is that it gets under your skin by being so tender and slight. 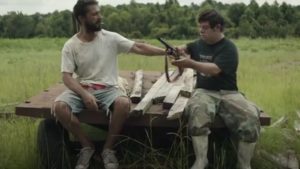 Its really a film about America and its perception of its dream. This perception is become, as ever, redefined by the next generation. A redefinition lets us in on how the thing has changed, how it has adapted and how it has failed. People are disillusioned and reality is a best of burden. THE PEANUT BUTTER FALCON is a starngely beautiful thing because of this. A tenderness of the humanity of people but without ever distancing it in Hollywood gloss. Exceptional cinema. Truly.