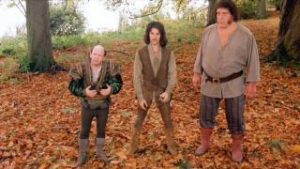 A young boy is sick in bed. He is playing a video game but his grandfather feels he should be reading. After all it is the best way to get over illness. That is to laugh, cry, jump and all that. the story he tell is about Buttercup who lives on a farm in Florin. Westley does chores for her and is in love with her. She cant take his hand because he is simple man. So Westley sets out to fortune. However when the ship he is travelling on is attacked by pirates, it will mean adventure and excitement all the way! 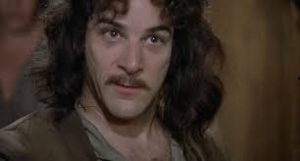 To reflect on a film that I first saw at the age of 8, through eyes that are now thirty years older, seems awful. The adventure story that taught a generation that to read is better than to play video games. That told us sardonic comedy and kids films could mix happily together and that Rob Reiner is a very versatile director. 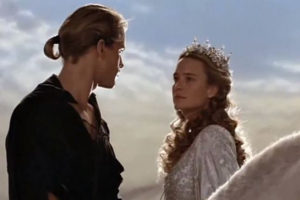 However Andre the giant and Peter Falk are dead, Mandy Patinkin has grown into other roles and Robin wright has redefined her career. So has Cary Elwes, who is a great actor whose good looks have impeded him and his career. Then finally you have a director that was on his peak and now has descended into a sad parody of himself. The story became a classic, genre merging piece from a writer who is skilled and has an amazing back catalogue. It was seen even on its original release as significant and that has not changed.

Is it any good? Yes but it has been paralleled and in truth even bettered in the preceding years. It is still a funny film that can bring about the smile and the smirk of good satire. It also has swords and swinging with which to make a solid enough action film. It is all told though more adult than I really remember. More mature than I comprehended and it gives credit to the viewer to define what they take away. All in all it is with these little swipes of narrative that the film still holds up today.