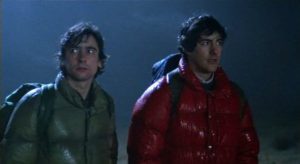 John Landis horror comedy classic, plagued with nightmares and moon music, has been released again. This time by Arrow video no less. They have offered us something interesting. A new 4K transfer of the film no less. With the process supervised by John Landis. So you, like me no doubt asked the essential question. Should I invest for the forth time, in another copy of  AN AMERICAN WEREWOLF IN LONDON. Should I throw away that VHS, DVD and Blu Ray version of this cult classic horror comedy? Should I rewatch that Moviedrome introduction from when they screened this masterpiece? You remember the one with Alex Cox on the moors and the howls of evil in the distance. Well dear reader, let us have a walk in the moonlit moors and oh wait, I can hear music. ‘Blue Moon…You saw me standing alone…’… Whats that breathing… Its heavy… oh look…a dog…oh my god!!! 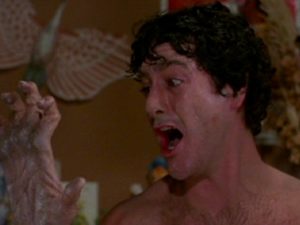 David Kessler (David Naughton) and Jack Goodman (Griffen Dunne), are trekking across the moors in Yorkshire. They wanted to go to Rome but then this was easier as a start. Stopping at a local pub called the Slaughtered Lamb. A village pub with old fixtures, village folk and a five-pointed star on the wall. Asking about it sees the locals become hostile. The pair  leave. They are told to keep to the road, stay clear of the moors and beware of the full moon. As we expect they walk off the track and become lost. The moon is their only guide. Then a mysterious howls in the distance roars. They are attacked by a vicious creature, Jack is killed and David injured. He passes out, only just before seeing the beast has become a man. David wakes in a hospital in London. It has been three weeks and does not remember what happened. David starts having graphic nightmares, filed with death and blood. Jack appears to David as a ghost, explaining he is now a werewolf. Jack urges David to kill himself before the next full moon or else. David ignores this as a wild fantasy. Then one night, alone at home, the moon rises and David sees that the warnings were all correct…. 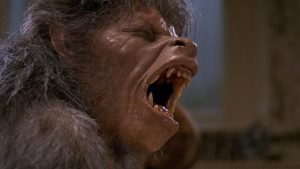 Landis made some superb films but AN AMERICAN WEREWOLF IN LONDON is his masterpiece. Playing with convention, horror genres, Universal studio myth, comedy and histronics, Landis creates a hallucinogenic nightmare. One that not only continues the Wolfman legend but renews it. One that keeps the Universal stock and invests anew. He nods to all of this. Mentioning the films and then riffing on them. But it is more than this and better for it. Landis infuses it with a blackness of comedy. A touch that allowed modern audiences to get the joke and maybe also, take the whole serious. Life is so absurd, as to be horrific. A tinge of the excess and the absurd. Nazi zombies, riff on the cult origins and loves of the director. British bowler hats and upper class silliness nod to Ealing comedies. Blood splatter in rich deep red is all Hammer horror and no mistake. Made in the same year I was born, it holds up extraordinarly well. 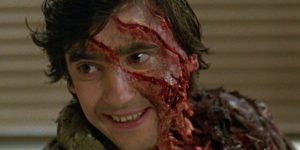 So to the question at the start. Should I throw away that VHS, DVD and Blu Ray version of this cult classic horror comedy? Well

The new transfer, compared to the older 1080p Blu Ray, is not as much a step up as some would think. The print for previous version was nice. Clean. Grain was not noisy. The pallette tender. Now it is a little nicer certainly. A little depth has come finally. Projected it is not as flat as the blu ray, nor is it as drained but it is not a superior step up. 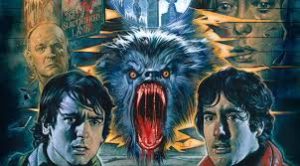 Right. Some of the below has been seen before. I have highlighted what in bold. I will also only really look at the new extras. The top three first. Mark of The Beast: The Legacy of the Universal Werewolf is the best new feature on the set. Daniel Griffith captures the sensational film via its components. He also seems to understand that to talk about one film, you need to go back to its origins. Think He’s a Jew: The Werewolf’s Secret, new video essay by filmmaker Jon Spira is an exploration of Jewish identity on screen in the film. It is also one that delves into the horrors of the last century with imagination and punache. A hard topic done with true skill.  Artwork by Graham Humphreys rarely does the great artist get his credit but if you like me, love a display piece, this is one to display in a place that is for you, of pride…so to speak. 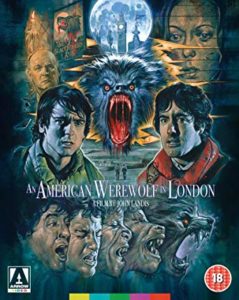