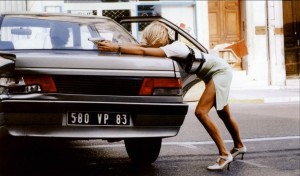 Luc Besson has always had his hands in a lot of pies; from directing (right up to the recent Lucy but not forgetting the classic Leon), producing (without him we’d probably not have Taken) and of course writing (Taken, Transporter amongst a very long list of others). In 1998, Besson, who had already gained a substantial cult following after La Femme Nikita, Leon and The Fifth Element wrote the first film in what was going to become a hugely successful French film series, Taxi. The first in the series was later remade in the USA starring Queen Latifah but of course without the charm and charisma of the French original.

The premise is simple enough; to wipe clean a mischievous parking record, a taxi driver, Daniel (the cheeky Samy Naceri) must work with a police inspector, Émilien (Frédéric Diefenthal) who has no driving skills whatsoever. The inspector is on the tail of a set of German bank thieves called the Mercedes crew and to prove to his fellow colleagues and his boss that he can do his job well, he decides to take the capture of the gang into his own hands. When he goes to arrest Daniel after one surefire crazy ride, the pair come to a deal that if Daniel drives Émilien around and gives his access where needed, then the slate could be cleared.

Throw into the mix, Émilien’s mother who think Daniel is the best thing since sliced bread, Daniel’s girlfriend Lily (Marion Cotillard) who just 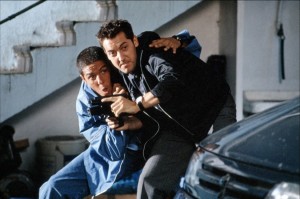 can’t seem to find a good time to have sex and Petra (Emma Sjöberg), a colleague of Daniel who he pines after with all his heart.

Of course this is a recipe for both disaster, great action and hilarious results, which is exactly what you get when you open Taxi. Besson at the time and since has gone on to cement himself as a master of storytelling, delicately balancing fun action packed sequences with a sense of humour. Especially the relationship between the central two; Daniel and Émilien. They are ying to the yang, hot to the cold – whilst they come from completely different worlds, they manage to open up things neither could have possibly discovered without a little push. This of course makes it fun for the audience to watch because they get themselves further embroiled in the mystery of the story and of course, the audience are forced to think this is never going to end well – but of course it does and it’s so fulfilling and exciting as Besson’s story approaches it’s final breathtaking sequences.

Director, Gérard Pirès does a brilliant job capturing moments in Taxi from the hilarious shoot out at the bank once the robbers get away and the police end up shooting at themselves, to the intimate moments that are cruelly disturbed the whole time between Daniel and Lily, to being inside the taxi itself and experiencing the high speed chases and excitement with the characters.

Taxi is a classic in action cinema and 16 years ago, it certainly set the bar high indeed but the film still feels as cool and current as it ever has and is remembered with a cheeky smile.