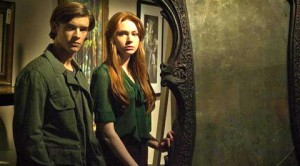 Oculus is a fun filled scream of a horror film, playing on the deepest part of the audience’s psyche – fear. As the audience quickly learn, fear is what makes this such an enjoyable experience, because it plays both with the audience and the characters at the same time. Taking place in two different times; the present day and 11 years ago, Mike Flanagan’s story (based upon his short film) follows siblings, Kaylie (played by Dr. Who’s Karen Gillan) and Tim (Brenton Thwaites who is also currently starring in Maleficent) who as young children move into a beautiful new house with their parents; Marie (Katee Sackhoff) and Alan (Rory Cochrane). One of the latest acquisitions to the house is a beautiful antique mirror, which goes into Alan’s study but very soon things appear to go bump in the night.

Marie starts to hallucinate when she stands in front of the mirror, Alan starts to have an affair with something supernatural (apparently from the mirror itself), the plants in the house die and the dog disappears when it is locked in the office alone. This culminates in the murder of both Marie and Alan, whilst Tim is shipped off to a mental health facility and Kaylie is placed in the foster system.

11 years later, Tim is released from the facility as he no longer believes that something supernatural killed his parents but instead that he has taken 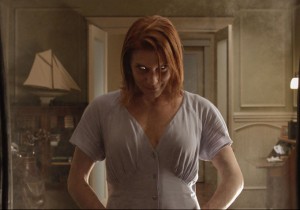 responsibility for his actions and Kaylie appears to be living a normal life working in an auction house with her fiancee, Michael (One Tree Hill‘s James Lafferty). That is until the mirror that started all this turns up at the auction house and Kaylie remembers a promise that she made with her brother all those years ago; that one day they would destroy the mirror and the power that came with it.

As it turns out, Kaylie has spent years researching and following the mirror, documenting everyone that has ever owned it and learning of the vast number of mysterious deaths that are connected with it. She knows that her father didn’t kill her mother and she just wants to clear her father’s name. Together Kaylie and Tim spend one more night in the house where their nightmare started – Kaylie has sorted out supplies, cameras to catch the evidence and a plan to end this once and for all but that depends on whether they both make it out alive at the end of the night.

In a much appreciated recent revival to the haunted house sub-genre, Oculus joins the ranks of Insidious and The Conjuring for which we have James Wan to thank for. The scariest tales are always those that take place in one location so when the siblings close the front door to the house they used to live in, that is when the fun really starts. The creepy tension begins as soon as the film starts, with the mirror causing Kaylie and Tim to see the people that it had killed before and with no pattern for when they appear, it is always in calm that the best shocks happen. Both Gillan and Thwaites are great in their roles as frightened siblings, alongside Annalise Basso and Garrett Ryan who play the younger versions of them both respectively. All four have great chemistry, playing off the fear and emotions of the other sibling and really bringing the audience into their terror and gripping them throughout. 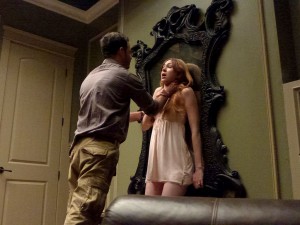 The best points of Flanagan’s filmmaking is when the two parallel stories cross over and elements merge across time – quickly the audience lose track of whether they are watching events through the eyes of present Kaylie and Tim or the younger versions of themselves, and this makes for quickly paced tension that never quite allows the audience a rest. Whilst the climax of the film is entertaining, it is pretty obvious from the start and yet that doesn’t take away any enjoyment at all.

Highly recommend and expertly crafted, this brilliant terror of a film plays with the audience from start to the finish and leaves them worried for one of their most important senses; their sight. Oculus is a great watch and one that won’t be forgotten in a hurry.