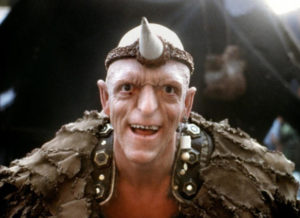 Wes Craven. The man who made our nightmares visible. He may never be as well remembered as Hitchcock or Kubrick but he is an equal t his contemporaries like Hooper, Romero and Carpenter. THE HILLS HAVE EYES PART 2, is the sequel to the 1977 THE HILLS HAVE EYES. That was a nuclear paranoia, back of beyond, city folk fear of the wilderness in film. The sequel, as the breathless commentary from The Hysteria Continues suggests, is all about keeping attention on its director. Horror was a dirty word by then and Craven wanted to be working (Elm Street was very close to being greenlit) and the studio had pre sold Cannes. 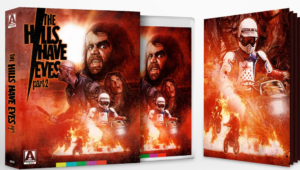 A motocross team, run by survivor of the hills family Rachel and Bobby Carter (Janus Blythe and Robert Houston or he of the Shogun Assassin fame!) are about to travel for an event. They have invented a new super fuel and winning is key. So they head out across the desert. Opting for a a shortcut across the desert, it almost makes for another load of run and scream horror. So a busload of youngsters drive straight into the path of the remnants of the cannibal kin. Evil Pluto, the blood-hungry brute The Reaper…. 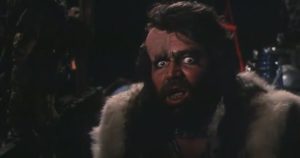 Primal fear theory suggests we scream at the relived horror of the everyday. THE HILLS HAVE EYES PART 2, we expect a rerun horror and we get a rerun horror. Then you get the action, the comedy and more of the Craven riffs on other filmmakers, done with a heavy heart I suspect because when you are being made to do it, the film is done less ambitious and with a little more shrugs.