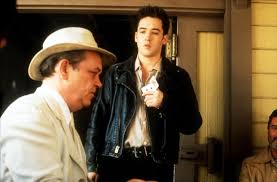 To Grift : A con artist: someone who swindles people out of money tipshrough fraud.

That is at the heart of The Grifters. Lilly Dillon (Angelica Houston) works for a bookmaker, Bobo (Pat Hingle). He has set her the task of making large cash bets at race tracks to lower odds. Cutting long-shot racers paying large sums. Her son Roy (John Cusack) lives in LA and is a grifter. Roy left her eight years prior and avoids her company at all costs. When she finds him ill at home, she calls in the medical services. Roy was caught out doing a scam and was struck in the chest with a baseball bat. When medical assistance arrives, Lilly confronts the doctor and after threatening violence, he does confirm Roy has internal bleeding. While at the hospital Lilly meets Roy’s girlfriend Myra (Annette Bening), a swindler and hustler that Lilly sees a lot of her self in. They don’t get on and this will cause a meltdown in everyone’s relationship. 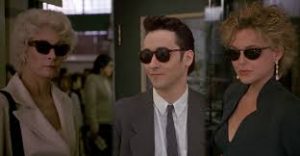 I love Noir cinema. I love its human relations that are straight from biological game theory. The self interest, scheming and duplicity akin to the worst in humanity. I also love the layering in narrative, story and character. Often this takes on multiple dimensions in relationships and are not only just an interaction on a single level. In The Grifters sex is the driving factor, not the only one but the one which is so powerful. The Oedipal element. Love stories usually merge with character development but in Noir, money and crime live together with sex. So violence rears to a surface level, sex and violence are primal. The Grifters is all surface and anger. No filter. Mean people are scheming. They are sexually driven. They are also under fear of explosive acts of violence. They are releases sexually when they happen. They are also calculated. This is the deeper effect. 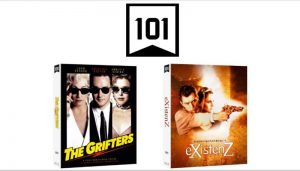 Limited edition booklet: Includes ‘Jim Thompson, Noir, and the Popular Front’, an essay on the American author s societal influences by David Cochran, and ‘Elmer Bernstein: Grit not Grift’, a review of the legendary composer s career by Charlie Brigden.