The Ones Below DVD Review

Openly and unapologetically derivative, Hanna writer David Farr’s The Ones Below doffs its cap shamelessly to the psychological thrillers of yesteryear. In particular, it is a work in thrall to Roman Polanski, and specifically his opus, Rosemary’s Baby. It is there in the music cues and the claustrophobic tension. There are even shades of Clint Eastwood’s debut directorial chiller Play Misty For Me. In fact, part of the fun of The Ones Below lies in spotting these affectionate open-palmed gestures. 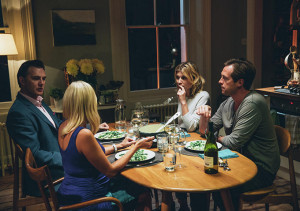 Embodying the minimalistic set-up of a chamber piece, matters focus on young professional couple Justin (Stephen Campbell Moore) and his pregnant wife Kate (Clemence Poesy) who reside in a smartly converted Georgian house in an affluent borough of London. Their world is turned upside down one day when new downstairs neighbours arrive in the form of Jon (David Morrissey) and Tessa (Deborah Findlay). Both couples are struck by their shared similarities. And yet, while they may appear to have a lot in common on the surface, they are certainly not the same in many other respects. These initially imperceptible differences become catastrophically clear late one night.

Farr racks up the tension with a skilful guiding hand. Keeping in line with its decidedly old-fashioned ethos, the picture glimmers in a pristine 35mm print, offering some occasional directorial (and possibly deliberate) creaking, and a rustic, not quite glossy visual hue. It is apt for the content. 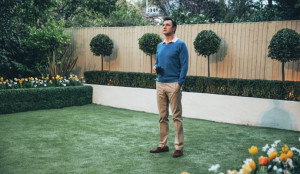 The references offered in the preceding may flatter to deceive – and even more so when the adjective Lynchian is dished out– but there truly is a cosmetic Lynch feel to the garden scenes. But, despite the flagrant surface-grabbing references, this is still a feature that falls outside of pastiche.

Crucially, the narrative almost, very much ‘almost’, manages to hold it all together. Whilst some might argue that it falls apart a little in the final third, it is never less than a riveting watch. The Ones Below may smack of a minor release, but it stokes some perfectly good anachronistic thrills and, in an age where nostalgia is warmly celebrated, there is little wrong with that. A pleasant surprise.

THE ONES BELOW – available to buy on DVD from 4th July