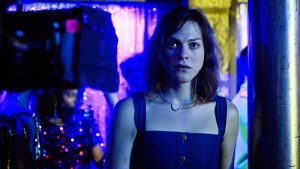 Sebastian Leilo breathtaking film is drenched in humanity but sprinkled with surreal moments that would fit equally into Federico Fellini. Marina Vidal (Daniela Vega in a stunning performance) is a cabaret singer who has finally achieved a comfortable place in her life. She is in love with her partner Orlando, living in her own home and on the way to career goals. Orlando is a divorcee whose family took the relationship hard. After the death of Orlando, Marina life spills into a waking nightmare of rejection, discrimination and violence. His family want her out of their lives and Orlando’s house. Money they want no doubt as it is in a up market area of the capital.  Police officers treat her like a criminal, often forcing intrusive examinations and unpleasant questioning. Even the medical staff are obstructive and offensive. When she is banned from his funeral and then assaulted it reaches a crescendo.

Daniela Vega rightly received widespread praise for the lead role in A Fantastic Women. It might seem unfair to ignore the Felliniesque scene, director Leilo’s bold direction or even the use of silence and sound but for me Vega is essential to talk of. She makes the film and is captured in a way that tells you the director knew this too.

The camera lives for her face, which is expressive and tonal. Then her responses to the environment she navigates, her emotional revelation to pain and love. This is the films real power. Centring the film on her performance, constructs the emotional balance required to connect what is happening to the audience. Even more refreshing is that it does so without manipulation. Layering the political foreground with the emotional near ground. Her pain at losing her Partner but one she is not allowed to grieve for, is stunning. 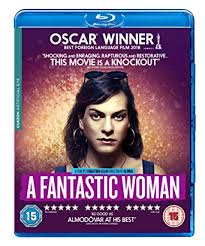 The extras are little to shout about sadly. The making of feature has the only real extra weigh. Because it talks to the creators about how they capture emotion and image with Vega at the core.