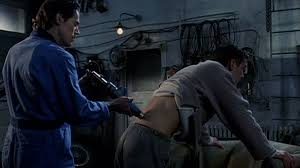 Lets game like its 1999…. Or at least live in a world were virtual reality was on the horizon. Of course now we have augmented reality and all that but then we had dreams. Antenna Research’s Allegra Geller (Jennifer Jason Leigh) is trialling her newest game eXistenZ. Its a pod software product that connects into the neural network of its users and creates a false reality. Antenna have a trial group set up to use the software for the first time. 15 people have all agreed to help and are sat in a church hall waiting. When a terrorist group of pro reality soldiers attack the meeting, shooting two members of the audience dead and Allegra in the shoulder panic ensues. Marketing trainee Ted Pikul (Jude Law) steps in to save her. They both flee the scene and find escape via a station wagon. Confused and unsure what to do, they plan to hide. Heading into the wilderness, Allegra knows she is a hunted woman… 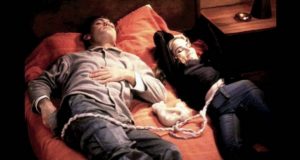 I saw eXistenZ  on its initial release and found it then a great, abstract watch. I remembered some of it very clearly. Themes were on the surface and I remembered them very vividly indeed. eXzinteZ on re watch is a mixed blessing because of this however. It has great body dis-morphia tones, revealing our obsessions with body, identity and the self. This morphing is as expected from Cronenberg, visually potent and psychologically rich. However I forgot the themes of artifice and technological substitution. The idea of how we use one to create the other. It perplexed me then but resonated with me now. It feels just to often artificial but this is deliberate. The commentating on the thin line between verisimilitude and gaming dream is visually potent because of Cronenberg but over done… 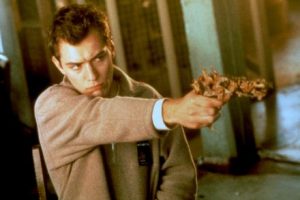 The new extras can be called exceptional. The best is Kim Newman and Ryan Lambie commentary. For either an overview of the work of director C, horror of the body kind or even just to hear about the casts credits. Nathaniel Thompson comes in second and is more detailed in terms of the film and less about the body of work. The interview with Eccleston seems to have been done with little time in prep. Its valuable but he gives what he did in the film, little time and energy. 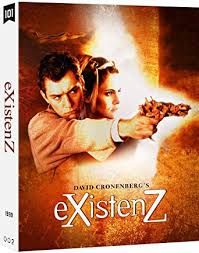 The Leader: An interview with Christopher Eccleston

Limited Edition Booklet: Includes ‘Enemy of Reality: David Cronenberg’s eXistenZ’ by Alex Morris, and ‘Of Fabrics and Flesh: An interview with Denise Cronenberg’ by Phillip Escott.