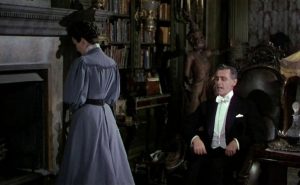 ‘I am warning you Sir, she has something up her sleeve beside her arm‘.

Black sky, rain weeps, two funeral hearse trickle to a halt. A man disembarks and walks inside. He then smile and cheers. That man is Stephen Lowry (Stewart Granger). He has just murdered his wife after she tries to control him and got away with it. Or so he thinks. When put upon cooking servant Lily Watkins (Jean Simmons) discovers what he has done, she resorts to blackmail. First Lily wants a promotion to the head of the house servants. As an extra she will have his late wife’s jewels. Then she wants her clothes and next her room. After dispatching the rest of the servants away from Lowry, she bars him from entertaining his new flame Elizabeth Travers (Belinda Lee). Now under the control of Lily, Lowry snaps and decides to follow her into the fog and do something rash… 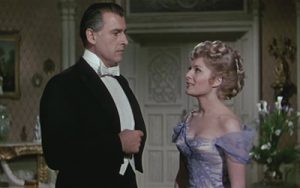 ‘Whenever I look at her picture, its like she is trying to tell me something.’

This tale of murder and blackmail, played with delicious tones of menace and sexuality, falls into Gothic melodrama. I didn’t happen to know this. I am reliably informed by the extras on this film. Real-life husband and wife acting team, Stewart Granger and Jean Simmons play two utter unlikable characters, that cant live without emotionally and physically abusing each other. They play their roles with notes of venom. Extracting the doomed nature of control and power. Blackmail is an ugly thing and here it is a tool of oppression and subdegation.

It is also fascinating in understanding class, gender and even sexuality in Victorian England. This all is brought together richly by director Arthur Lubin’s artistic direction (in framing and in narrative extrapolation). Lubin seems to ease the whole, making the actors performances tighter and in the process, more unnervingly cold. but even more so the work of cinematographer Christopher Challis (he of Tales of Hoffman fame.) The oppressive visual tone, the hues of flickering gaslight in the mansion and I love the foggy streets of London that seem to be walled enclosures, trapping the characters in them. Its something to see. 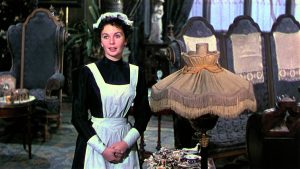 Does our love in with Powerhouse continue? Do we still want more and more of their output? Simple answer. VERY MUCH MORE!

HD transfer to start with. This compliments Challis cinematography. It lets his tonal work become heightened (as I suspect he would have wanted). It also is not done just by our selection of pictures! The audio slipped out of my speakers, capturing those isolated steps and that raised voiced mob…more of that when you watch! 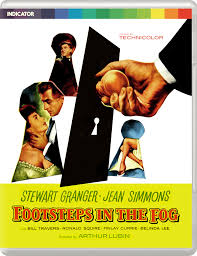 Gothic Imprints  Ever consumable in any form, Kat Ellinger details Gothic Noir / Melodrama. Placing Footsteps into a rich tradition as well as detailing films from the trope. The real selling point here is that Ellinger then underpins the evolution of the genre and does so with a massive body of detail.

Something in the air Treads over some of what Ellinger detail but Botting is more on the Victorian England desired by our transatlantic cousins as well as unpacking the genre conventions with a skill only someone in love with film could.

Image gallery  Wait a minute, before I am given untold grief about this, I personally love these on set pictures. Its like a time capsule and can sometimes be more rewarding then many expect. I really would say to you, SEE THESE!