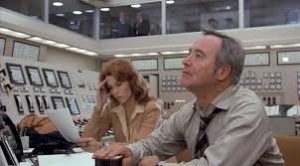 The mid to late 70’s were filled with message films. Films that screamed, shouted and raged at all things. Films that infused the cultural discourse, navigated social concerns with cinematic convention and even influenced wider political positions. CHINA SYNDROME does all of this and we expect that from a film about nuclear power. We expect it to convey fears of manipulation of power and duplicity of big business. What we dont expect is its premise is based on an actual event. News reporter Kimberley Wells (Jane Fonda) is stuck on light entertainment news. When assigned to cover Ventura Nuclear Power Plant with crew Hector Salas and Richard Adams (Michael Douglas) everything changes. A near accident leads to a major news story. With the help of technician Jack Godell (Jack Lemmon) and footage taken by her crew , The truth shall be exposed. 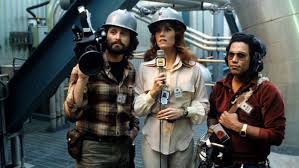 If a nuclear power station reached critical mass, then it would melt all the way to China. Not exactly accurate physics but it is a powerful metaphor. One that we are forced into concluding now and seemingly forever. Lets put this aside. CHINA SYNDROME is not wrong in using this technique to manipulate us . In the decades prior to the 1970’s big business was a heartless creature (it still is but now it has long tentacles to influence and no communism to challenge its narrative.) CHINA SYNDROME paints Orwellian tones to businesses mandate, omnipotent, omnipresent and as plain a bastard as you could find in affairs of humanity. It was timely sure but the audience go along today as they did on first release, because you have characters who we care for. 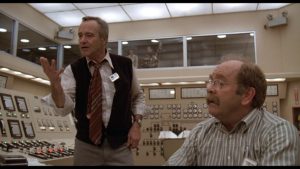 This is because they are sculpted by actors who understand the humanity. Human connection is required to fight an omnipresent foe. So as to make this conspiracy, murder and fraud palatable. So to make the case for why we should always be a little worried about big business and social good. However interestingly we also see something else in the light of dawn. This was the period when a distinct cooling (excuse the pun) of the harder message film was happening. Gone is the aggressive ‘look what they have done’ innocence and instead we have the ‘you expected more and they delivered less’. You can see it in the dramatic register. Scenes are emotionally tense, as well as politically potent. When actions happen, we are angry but we are also worried for those still left in the firing line. A remark and saw it mediate character and empathy. 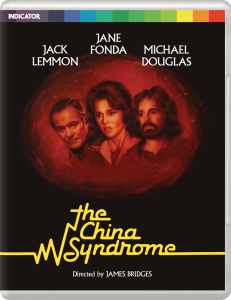 The extras on the disc.

The H D remaster lives up to claims currently doing the rounds. The DVD version lost a lot of picture quality and that has been restored here. That means the power station fluorescent lights are washing out everything and the TV station darkness is rich and black. The colours are tonal and its a thing of beauty in every respect. Sometimes this does however bring out the rather strange anomalies. The matte painting for the Ventura plant as an example. It now looks like a 50s B movie construct and it pulled me out… but that might just be me. I love Powerhouse and their extras are always very, very, very good, but I never get into the audio commentary that is not an audio commentary. It is instead Jack Lemmon (a lovely and very interesting man ) in the John Player interview. Its filmed before the film was even made and he is talking about his work that is prior to this film but over the film. Often it has little relation. Now do not get me wrong, it is still excellent and I wished it had maybe some image gallery stuff from the film or from Lemmon. Creating a Controversy is a real high light. You forget how explosive this film was and how much Nuclear power became vilified. You also forget how the real life events it is based on (the film that is) are even now so absent from the debate on alternative power.