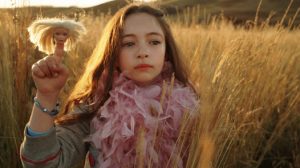 Released to a tidal wave of hostile press, this is a film which both charted the change in form of its producers and the ambitions of its director. Director Terry Gilliam suggests that this film is his child self, crafting a world of imagination. Exploring the world with the power of resilience that marks children out as unique. Well it might be all of this. It might be exactly what his introduction states. Or it could be a translation of Mitch Cullin’s Southern Gothic  novel, infused with the world via Alice in Wonderland. 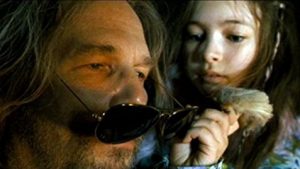 Jeliza Rose (Jodelle Ferland) home is a cocophany of noise and sounds that run over each other. She lives with her mother (Jennifer Tilly), a chocolate chomping, bed ridden screaming nightmare and her father (Jeff Bridges), a faded rock star, junkie, Jutland freak. When he mother dies, her father returns to his family home in the deep south. A mansion that has decayed, surrounded by a field that is overgrown and a school bus that is left to rust. All this and a squirrel to. What has Jeliza Rose been dropped into?

Tideland is to long. It is. It is also oddly cynical. Lacking in empathy and heart. It does however have rich layers of imagination. Making it utterly engrossing on the level of a dream. You are captivated by it, mesmerised by it. Hallucinated by it. The Southern Gothic elements are defused. They are scattered with thought. They trickle like sweat in the heat. Mysterious and majestic enough to make it rewarding. 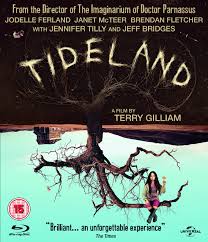 Well the most substantial things here are the transfer, the commentary and Neil Mitchell essay. The transfer looks stunning and on the big screen it saturates the colours, the tones and that exteriors which as Gilliam says in the commentary are ‘full of life’ while the interiors are ‘dead and crumbling’. The commentary is Gilliam at his best. Funny, thoughtful, insightful, unafraid to mention his influences or his opinions. I liked his thoughts on the world audience to the film and what they took from certain elements (like Bridges smiley face tattoo). Mitchell essay is a whole heap of excellent. Read it like before the film and then after. It enriches the viewing and the content…