Humphrey Bogart is one of classic cinema’s most intriguing actors: his long, craggy face seems the antithesis of the traditional handsome film star, yet he’s remembered as one of the most alluring, masculine stars in cinema history. His attraction seems worn into his face, a kind of seasoned, experienced wisdom acting as the source of the attraction. Nicholas Ray’s In A Lonely Place provides one of his finest and most unusual performances, hollowing out his cynical goodness to explore the wounded violence of masculinity in the twisted world of Hollywood. It isn’t hard to see why Criterion have jumped on this title early for their quickly expanding UK catalogue; the film’s stature has just kept growing since its 1951 release, with the distinguished filmmaking coming even sharper into frame with the polished 2K digital restoration on show here.

Ray’s profile was considerably raised by the endorsement of Jean-Luc Godard (seen in the supplemental documentary I’m a Stranger Here Myself) and the Cahiers du Cinema at the backend of the decade, and his flair here is still awesome, playing with noir lighting in darkly provocative ways and drawing a tense, electric relationship between Bogie’s suspicious, tortured screenwriter Dixon Steele and Gloria Grahame’s intrigued neighbour Laurel Grey. Grahame is the film’s other ace card: she has a tenderness recalling Guiletta Masina, but a hard nose, making her fragility feel tenacious rather than weak, a fearless honesty and instinctive approach to a man she can never entirely know. 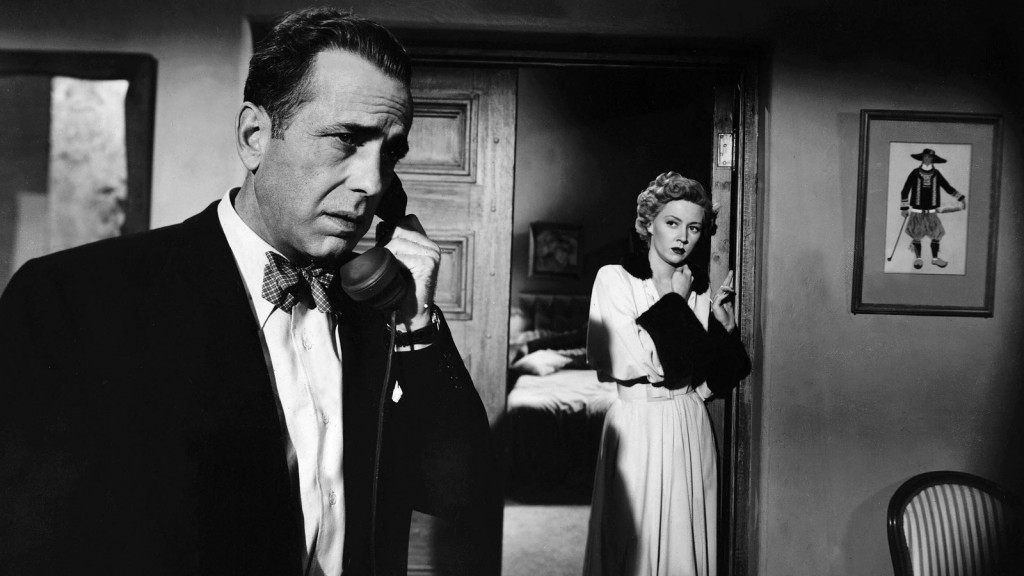 In A Lonely Place came as the studio system had begun its slow deterioration, and it feels quite apart from it even while employing one of the star system’s elite in Bogart. The psychological insight of the film is remarkably acute, as is the reflexive depiction of Hollywood itself; it probes beyond the machinations of standard narratives to examine the dark impulses that bring people to write them, and the damaging lines between fiction and reality. As we look back now, it also bridges the polished constructions of the 1940s and the dark, cynical thrillers of the late 1960s and 1970s; a contorted bridge between Hollywood glamour and independent revolution. It’s a lightning rod of a film, all these years down the line. 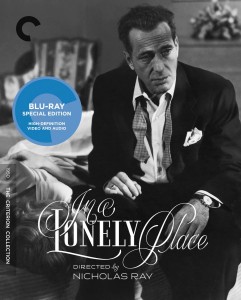 Criterion’s roster of supplements are led this time by the audio commentary track, a recording fresh from the US edition last year, where critic Dana Polan provides a very literary analysis of the film to complement the BFI Film Classics book he wrote over twenty years ago. It offers a very different flavour from the typical filmmaker commentary, as Polan uses his extensive knowledge to illuminate themes and techniques the film houses and how the lives of the filmmakers informed the art they created. Imogen Sara Smith’s essay booklet is of a similar bent; as is a short but fascinating interview with Gloria Grahame’s biographer Vincent Curcio, who really packs in teasing detail to make his bio one to add to the wishlist immediately.

From the archives, Criterion have reaped an intriguing trio of extras. A 2002 revisit of the film by director Curtis Hanson (L.A. Confidential, Wonder Boys) provides some amusement as he stands around awkwardly posing in an attempt to look impulsive, but the visit to the film’s main location is worth the time. Only the truly committed will last through the other bits here, though: an apparently condensed documentary on Ray from 1975, I’m a Stranger Here Myself, is inevitably dated in the staid, cold narration and holds torturously on interviews and behind-the-scenes footage, including an argument between the eyepatch-wearing Ray and one of his female students that turns time on its head. Finally, a radio adaptation of Dorothy B. Hughes’ original novel, produced by and starring Robert Montgomery, shows how much the film diverged from the existing story, but the old-fashioned mode of storytelling may make it a difficult sit for most.

In A Lonely Place is now available on DVD and Blu-ray from the Criterion Collection.