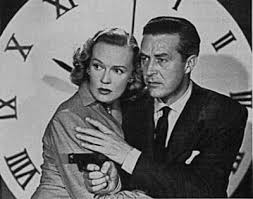 Clocks are at the centre of capitalism. ‘Time is money..’, ‘Time only needs Opportunity to be successful’ or that old classic ‘To be something in business you only need hard work and…’ You get it. So it should be of no surprise that a film about some dodgy dealings in business should feature a big clock (as well as a major city to house it in). So when head journalist at George Stroud (Ray Milland) decides to finally give his wife a honeymoon (five years after the wedding and with a child in tow), it seems he is either poor at time keeping or a flake. 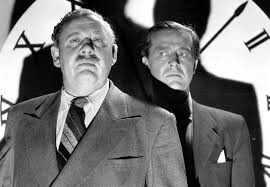 Well it is neither reasons that caused it. Instead its capitalisms answer to evil, Earl Janoth (Charles Laughton), a head of the conglomerate Janoth industries. He has been busting George to make the money and the grade. Now as he is about to finally go, Janoth turns up and says ‘wait a minute’. This is the usual stench of a pig of the capitalism variety. However George has just stumbled over a body that is linked to Janoth business interests. This is a problem for him. Especially when Janoth wants to find the killer… 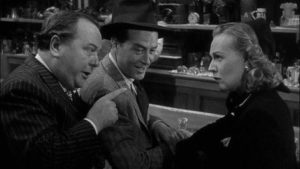 John Farrow is a great director. I love AROUND THE WORLD IN 80 DAYS (for my sins). Born in Australia at the turn of last century, he had a skill in telling stories without scrimping. I adore THE BIG CLOCK for this. Yes it has Milland sweating and straining, with his usual verbal stutter skill of acting. Yes it has also Charles Laughton, in a villainous performance of the greatest viciousness. However it is Farrow as director that make the piece work to its full potential. He directs scenes with an attention of space, rhythm and focus. Moving the camera, adding lighting and audio cues. 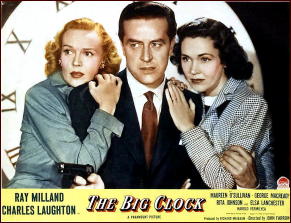 The HD presentations does make a lot of this. Losing little light and tone after some very poor DVD versions. These have soured a small amount of film fans. However we have all heard about the piece and waited to see it, anew. Adrian Martin commentary answers some of the reasons for how come this film is so powerful. Both visual and narratively.Martin understands enough of this and much else. Turning Back the Clock really gets its teeth into this however and is the best thing on the disc. Now if that is to do with the film as a whole. The other great thing on the disc is the Simon Callow A Difficult Actor, filmed appreciation. Witty but also honest. From an actor no less.