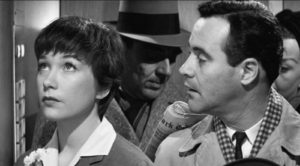 The best picture winning, true to life, comedy of male chauvinists meet a male with morality and humility is back and better than ever. C.C. Baxter (Lemmon) works for an insurance company mammoth. He wants to get up in the world and to butter the wheel, he lets executives use his apartment as there place of affairs of the extra marital kind. However when Mr. Sheldrake (Macmurray) mistress Fran Kubelik (Shirley MacLaine) is left high and dry and tries to end it all, he steps in and repents for the error of his ways. 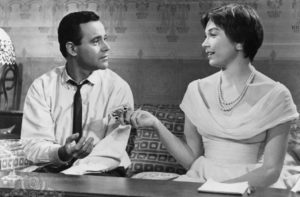 Coming off the back of, what some consider the greatest comedy of all time Some Like it Hot (I dont consider it so, as I find it irritating and unfunny but then I am a humourless soul.) Billy Wilder probably didn’t expect the next film he made to be such a hit. He was on a streak that started with his Oscar winning The Lost Weekend and ended with this film. What makes The Apartment so good is not only its simple but well told tale, its beautiful visuals or its fine performances. Oh No. 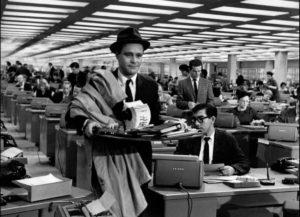 It is the universal themes that encapsulate it. Even now we are seeing the fall out of men in power and their abuses of it. Here we see this in micro reality. The devastating pain and hurt caused by a man who thinks only with his reproductive anatomy and not his heart. However this is counter posed by the idea that a younger and more sensitive age and man was on the horizon. Yes he might use his apartment to facilitate the transactions and better his career but he also sees the errors inherent inside this. If you haven’t seen it, do so. If you have then see it again. A message like this is hard to ignore, when told so well.

To the discs. Well you only have 3000 chances to grab one and make it quick. The film looks stunning in 4K. STUNNING. The extras are very good but I wish that Arrow would please stop using the same people to write for a variety of works. It is unfair that someone who is an expert in the field of say horror is blocking someone coming through to the field and has a true passion for this film. That is it…