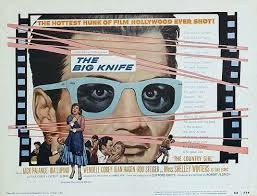 Hollywood has never looked so dark, or so devious as in this classic tale of control and redemption. Dealing with themes of Hollywood star images, business in an industry of mass communication and construction of identity, The Big Knife is bold and brilliant. Capturing the descent of a man who has on one side, everything that many desire and on the other, the independence to live a life free of interference. Freedom and control, profits and power are key here. The role of an organisation that has only to care about its image and its bottom line. What do they do when they have fear of loss, fear of a shareholder rebellion? 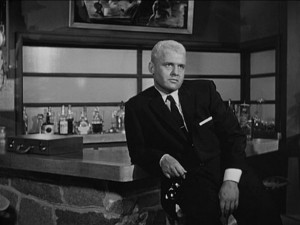 When star Charles Castle (Jack Palance) wants to save his marriage and his sanity, it seems the only solution is to give it all up. Stars rule the galaxy but are a timely force, that burn bright but fade. His success has been aided by his agent (Everett Sloane) and Hoff (Steiger) studio head and hard as nails negotiator. So when he tells him he wants out, it brings out the knives. Hoff knows about Castle. He knows about a crime that Castle committed. He knows because the studio framed another for it. Then they paid an extra Castle was in a car with to keep the secret to herself. Well maybe things can be arranged so she might share it around…maybe? 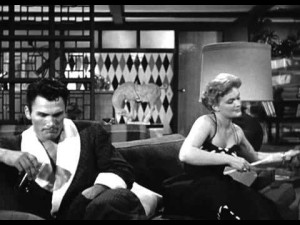 50s cinema often took a hard look at the state of the nation. Why? Well because America was becoming the super power we know today. It was also becoming more uncomfortable with this. Director Robert Aldrich directed two films that explored this discomfort. This is the bolder of the two, tough and uncompromising in tone and reach, it makes the film balance themes without dispersing them thinly. Acting as a bridge to the great performances it leaves little unexplored or exposed. You feel the deep rooted tension at the heart of a dream. The dream is sour but it is still what many desired. By not knowing the reality, you are left dazed by its truth. 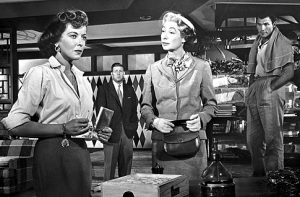 2K or not 2K. Does it not add great black to the colour scheme. Great whites to the faces and depth to the image. It sings off the screen and Arrow have loved the print. Not a blemish could I find. The real stand up part of the extras in my honest opinion is the commentary that builds like the film does. Definition and delight. Decay and deception are discussed and defused with a skill lacking often in film extras.

The Big Knife has, at its heart the root of all evil Money. Sides desire it and know how any form of mutiny can mean a deduction in capital. Desiring no loss of investment, financiers are forced some into dark corners. However having leverage over those whose fate effects your financial position can be advantages. Especially if that secret has layers. Deception brings the worse in humanity. It also allows for the ultimate sacrifice.

A shade darker then much of the output today, this film, based on an award winning play,  feels deeply even more unsettling as a tale of Hollywood. We know that secrets are hidden and sometimes they are controlled by big business.