Alongside the BFI Southbank’s Martin Scorsese retrospective is Martin Scorsese Curates, a personal selection from the vast range of films he has helped to preserve through The Film Foundation. 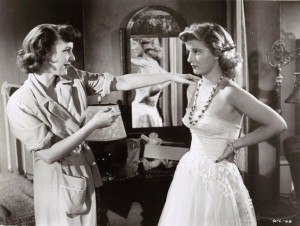 On the face of it Caught seems like an odd choice. That awkward title and an uninspiring rags to riches story where our heroine finds that life doesn’t always match fairytales. But there is much more to this than meets the eye. Max Ophuls, directing his last feature in Hollywood, takes this bare outline and weaves magic. Right from the opening scene between Leonora Eames (Barbara Bel Geddes) and her flatmate Maxine there is a disarming naturalness to the staging and performance that make us care for this everyday girl.

Leonora craves a prince charming but when he arrives it is not on horseback but out of the inky darkness in the imposing figure of Smith Ohlrig (Robert Ryan). If she had seen any of Ryan’s films she would know that the laconic act will soon give way to a bitter snarl and a temper as short as his tie.

Although Caught is a ‘woman’s picture’ director of photography Lee Garmes dramatic lighting is closer to Noir. It is as if Leonora’s innocence is subjected to Ohlrig’s life under a shadow and she is constantly straining to stay in the light. Ohlrig is a man emotionally crippled with money and is contemptuous to those around him like an angry statue in a museum of his own making. In contrast to this overbearing machismo is James Mason‘s Dr. Quinada. Quinada is a moral man and in Mason’s hands he is full of nervy energy, brittle and sincere, honest but blunt. He offers Leonora another way of life. There is a genuine spark between them and when Leonora gets swept up Ophuls camera makes us feel just as giddy and excited. 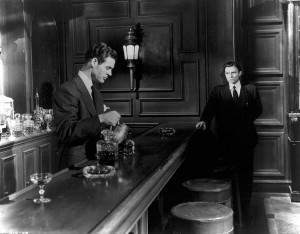 Ophuls uses the camera in such a subtle and graceful way, taking us through Leonora’s experience so we feel every emotion, every impulse and fear. The direction seems simple but every scene is an example of pure cinema where framing, movement, lighting and sound entrance us. Each world that Leonora moves through from stale mansion to chaotic doctors surgery is beautifully rendered adding to the sense these are real people trying to navigate their way through life. Robert Ryan and James Mason head up an exceptional supporting cast including a welcome appearance from Art Smith but Bel Geddes is the star. She reveals Leonora’s struggle and excitement (sometimes simultaneously) and creates a portrait of a woman realising that her destiny should be decided by herself not a hackneyed knight on horseback.

We were lucky to have Ophuls and even luckier Scorsese helped preserve this small wonder.

The Scorsese season, and the Martin Scorsese Curates programme both run at BFI Southbank until February 28th