A cleaner pulls up a blind to reveal a poster for The Blue Angel. So starts Josef von Sternberg‘s film which was advertised in much the same way: with Marlene Dietrich‘s Lola Lola writ large in stockings and frilly knickers. 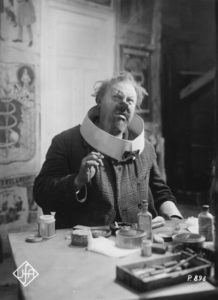 The film itself holds back her exotic charms and focuses instead on Emil Jannings fusty Professor Immanuel Rath. He is out of step with his charges: a bunch of proto-teenagers who have eyes only for their pin-up postcards featuring… Guess who? It is these cards that lead Professor Rath into the wild environs of The Blue Angel and toward the showgirl in the impractical underwear. Lola Lola is a blast of fresh air, free from constraints and unfazed by anything. Rath falls head over heels and we find ourselves falling with him.

Before this we have to shlep about with Professor Rath and feel the impatience of his students in classroom scenes that pale in comparison with the wit and verve of Jean Vigo’s Zero De Conduite. When Lola Lola does appear you yearn for the film to take on her get-up-and-go. But von Sternberg sticks with Rath and while his story is beautifully lit and fleshed out with a superior supporting cast the film remains in step with his leaden shoes. But this movie marks the start of greater things: audiences were exposed to the first feature-length German sound film and with it the distinctive voice of Dietrich in her star making turn. Her time occupying centre stage would come (notably in the luminous close-ups of von Sternberg’s Shanghai Express) but here she remains a trailer for future attractions, an image on a poster and a name twice over: Lola Lola. 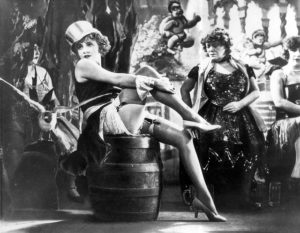 ‘The Blue Angel’ will be re-released in cinemas nationwide from 31 May 2019 to coincide with the centenary of the Weimar Republic and the BFI Southbank’s major two-month season Beyond Your Wildest Dreams: Weimar Cinema 1919-1933