Jean-Luc Godard had six films released in 1963. Le Mépris was one of those and it is more than most filmmakers manage in a lifetime. This is a film about a film where one director, Godard, pays his respects to many others while making a film utterly his own. 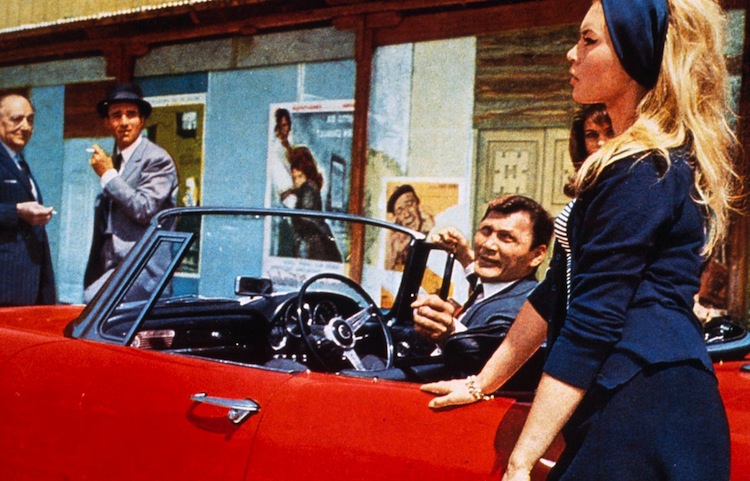 We follow Paul Javal (Michel Piccoli), a screenwriter summoned by Jeremy Prokosh (Jack Palance), a big time American producer. The job, to fix the script of his current project, an adaptation of The Odyssey directed by Fritz Lang (playing himself). Accompanying Paul is his young and beautiful wife Camille played by Brigitte Bardot. She is pure, unknowable, the polar opposite to Palance’s swaggering money man.

That swagger is reflected on screen: Cinemascope, exotic locations, Georges Delerue‘s atmospheric score. But this is an intimate story of a clash between a husband and his wife, between art and money. The women here are treated as props, pretty distractions from the real business of making art. It is this attitude and its corrosive effects that unravel the ties that bind Paul and Camille. While Paul claims to believe in the purity of art Prokosh declares: “When I hear the word ‘culture’, I get out my chequebook” as he promptly bends his assistant over to use as a makeshift desk.

Godard happily lets rip with references to film and literature. Paul has styled himself on Dean Martin in Some Came Running (Godard had originally wanted Frank Sinatra for the part), the story mirrors the film they are making and we see posters for movies by Hawks, Rossellini and Godard himself. Godard said: “What we are doing is making an Antonioni film but shooting it like Hawks or Hitchcock”. You can feel the sense of Antonioni dislocation here but with the addition of a thousand more words and for every great line, “Cinemascope is only good for shooting snakes and funerals”, there are swathes of dialogue you forget before you’ve even heard. As for the shooting, it is more reminiscent of another Godard hero, Nicholas Ray, in the bold use of space, architecture and colour within Raoul Coutard‘s wide frame.

Le Mépris feels like a grand achievement, more unified than much of Godard’s work while retaining some audacious directorial touches. But the emotion comes from the music rather than the characters who seem trapped within an unfolding tragedy. At one point we glimpse a poster for Journey to Italy. Where that film held us close to a disintegrating marriage Godard stands at a remove. Rossellini was searching for truth but Godard is more interested in the lies inherent in any relationship and within film itself.

As Piccoli’s screenwriter rails against the filmmaking system the producer’s assistant simply says “When it comes to making films, dreams aren’t enough”. Le Mépris questions whether cinema is about expression or manipulation. Here Lang’s ageing director doesn’t bat an eyelid at the producers demonstrative antics, he’s seen it all, and knows there’s no escaping compromise. Godard wasn’t safe either. Executive producer Joseph E Levine insisted he added nude scenes of Bardot. This was the first and last time Godard would work with an American studio.

‘Le Mépris‘ is released as part of the Jean-Luc Godard season from 1 January 2016 at BFI Southbank and selected cinemas nationwide.