A projector rolls; something’s not right. Snippets flash up on the screen: an old cartoon (upside down), an erect cock, a blank white screen. There’s a Swede in the shadows behind the camera, his name is Ingmar Bergman and he’s been ill, laid low for a year, but now he’s whispering to his 1966 audience, “I’m back, strap yourselves in”. 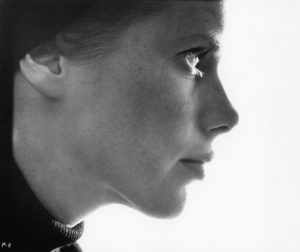 Persona is a two-hander, although perhaps those two hands belong to the same body. It concerns Elisabet (Liv Ullmann), an actress now rendered mute after an on-stage breakdown, and Alma (Bibi Andersson), the nurse tasked with breaking this thespian funk. After no clinical solution is found for Elisabet the doctor in charge suggests that the young nurse takes this actress to recuperate in the doctors remote cottage by the sea. This is a movie contrivance but then Bergman does keep telling us we are watching a film as he manipulates time and even the celluloid itself. The film is broken just like these women (and it can be just as neurotic).

The heart of the film is a monologue from Alma to the glassy facade of Elisabet. Alma cares for, cajoles, confides in and crumbles under the implacable stare of this broken icon. The film is about the disconnect between what we are and what we’re supposed to be. This realisation creeps up on Alma causing a crisis of confidence in a previously secure self. The actress understands a life with and without a mask so even as a patient she holds the power. After all, perhaps the only honest reaction to the modern world is to avoid the inevitable lies by staying silent.

This is Bergman, so suffice to say the film is technically bravura with performances that feel both natural and exact. The visuals are as sparse as the landscape, the gaze focussed as we watch Alma unravel. Sven Nykvist‘s camerawork still looks fresh and modern; it may be black and white but the truth lies in his exquisite greys. On the soundtrack Bach is pitted against Lars Johan Werle‘s disquieting strings to mirror the battle of wills on screen. 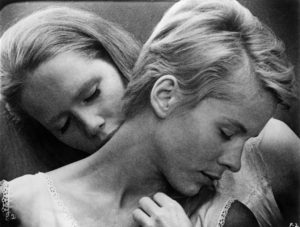 Perhaps the boy who bookends the film is Bergman, that wide-eyed kid that looks directly at us and later gropes toward a woman on the screen. He’s just trying to understand the actress on the other side of the lens by endlessly manipulating her captured image until his fingers bleed.

Persona remains essential in it’s view of what people are and what cinema might be.