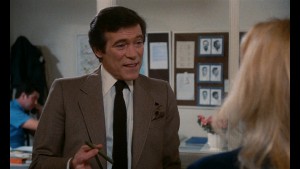 When a college campus is terrorised by a mad man (probably should say person but hey sexism is alive and well here!) who likes to cut co ed up and down, the police are called in. They prove unable to stop the deadly rampage and oversee more body parts turning up and more students disappearing. Fear stalks the halls and bloody body parts are laying on the stairswells. Its enough to drive you crazy but when Professor Brown sets out to solve the murderous events he uncovers more than he bargined for. 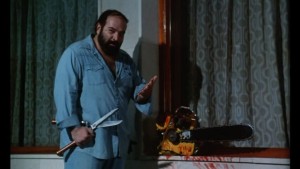 You might laugh, you might cry but you will certainly not regret this buy. It is a Spanish horror classic that might just be the most absurdly daft, blood soaked, gore splatter masterwork of the chainsaw and slice and dice genre. Yes there are a lot better films. Yes there are a lot bloddier, bleaker and bonkers. This however packages up a fairly silly plot, special effects, sexual desire and makes it rock. I am not saying to take it seriously at all. Tongue should remain in cheek and chainsaw in hand but it is a great evening viewing. 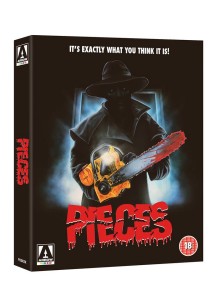 Thankfully the bad movies watching crap is over and you can enjoy a bad, good movie in Pieces. The extras are great with the highlights being the crisp Blu Ray transfer. The Spainish version would be my choice of the two versions. Its far more oddly visceral. The score CD is wonderful so try to get that. The docs and interviews are all very good but my stand out is the review of the directors work. I hated the commentary as I think those Hysteria boys are self indulgent gits but I am a self important twat so if its your thing…