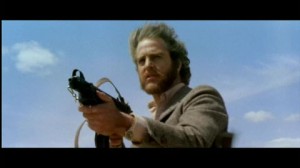 A plane lands at an airbase and a reporter has the event in his camera sights. Inside that plane is a doctor that might have the answers to a problem. When the doors to this haunted craft opens however all hell breaks lose. It is filled with mad killers. They rush out with Knives drawn and exact a truck load of carnage. Throats are cut, axes chop into heads, faces are split with blood. Those that stand to fight are literally beaten to pieces of tangled flesh and blooded body parts. These mad killers are not zombies, they are monsters, mutants and murderers. They over run the city, picking up guns and drinking the blood of those still alive or left for dead. The army has no power to stop them and calls in reinforcements but these meet much the same fate as they take on this maniac group. Gun battles, fist fights and battered remains are all that is left in Nightmare city. 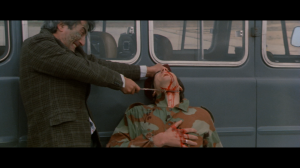 Cutting to the chase...

Oh god above….I understand the origins of this film and the whole Italian zombie film movement but this is one of those films that splits opinion. On one side you have the fans of it and they are hardcore. You have Tarantino and Eli Roth who both love this film and good for them. They are supported by a major group within the horror circuit of film fans and film know it alls. They look at this film and stamp it with a ‘so bad its good’ label. They do this because it shows to them that film should not be all self involved and up its butt. Also great for them. Then you have the other side, that look at this film and say, from its origins it is a disaster piece. It should be dissolved in acid and sent back to where it came. They sight the works of Romero, Fulci and the like as far superior and also richer pieces that actually illustrate indie horror films of the late 70s and early 80s is worth consideration. This group have fought with some success to get these into academic mindsets.

So where do I stand? Well firstlyI have to say that I do not buy this ‘so bad it is good’. A bad film is a bad film in my eyes. This is not something I believe deserves awards or recognition. Yes I love watching film sand laughing at some of those insane and OTT features but this is beyond that. It is a steaming pile of awfulness that is only worthy of consideration for its impressive art work. Secondly I object to the reflection that some have of a nostalgia of crap. We have to much of this obsession of awful and need to move on from that to a place where we can engage with a level of clarity. Now I have to say a well done to Arrow films. They excel in content and quality of product. This film has been given that touch and the extras (Listed Below) are amazing. The 2k is ok but this has a wonderful video on the problems and limits of restoration. The other great thing is the commentary that has Chris Alexander reflect on the film and its very dubious quality. He has great skill in being both an informed film fan and a film lover.