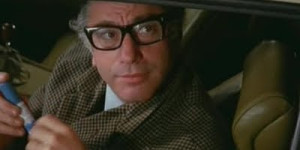 The body of a young beautiful student girl is seen rolling down the hill, a man in a mac with  that pulled down hard against his face. Running away and clambers over a wall. Seen by various people from afar and close up, from windows and cars to the park itself. The dead can’t talk but everyone sees to think that a TV personality and sports star is the man that did the killing. He was seen fleeing from the scene and was seen wearing the hat, mac and the outfit that seems to be a match. Problem is that he has a flimsy alibi and in the courts he will be a part of the awful circus of criminal courts.

Italian giallo films are a serious problem for me. Some are great and in truth, many are dull and weak in plotting, content or even form. The issue at the moment as always is that money has been invested and the industry want to make money from this investments.  Now this film is actually well plotted, great in its execution of form and its tone. Once again it is not the masterpiece that is often shouted out by the mass media but it is a well put together film and one though dated, is still a must watch.

Director Duccio Tessari makes a functional film, in that he makes the film have a centre in which we have a coherent story with good performances. He frames the world in tight shots to make it feel documented and recorded from life. He also adds texture and makes the film about the Italy we may not be aware of. I feel this is the high point of a film that is both very good but also a stand out in a career of a director unappreciated. The people @ Arrow have rewarded us with a great selection on the film. The brand new restoration makes the film look fault less but it also shows the skill of a DOP working in mixed and varied light. The subs are deserving of praise as they have corrected much of the problems of the past and its empty replication of crap reproductions. Commentary is solid but I feel Newman gives much more than Jones in value…. Howarth essay is sublime and he is a real gent. He knows the art, the film and the style so well…