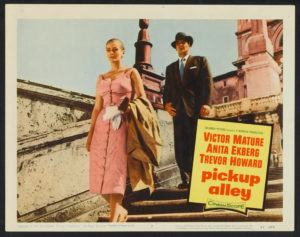 So Arrow academy have allowed us another lost film from a collection of films that should never have been lost but have been. Called INTERPOL in the US, this is a British film that takes on both film noir and those police films of the 50s. America did them well enough (and also at volume), however it is less know for British cinema to jump into the cannon. We often did this for money and to gain traction with the US releases. Directed by cinematic everyman John Gilling (he directed that Hammer masterwork PLAGUE OF THE ZOMBIES and the equally super THE MUMMYS SHROUD). Then produced by Warwick films, which is that of Cubby Broccoli Bond fame…ish. This is a narcotic crime convention laden story that delves into the post war drug issues (if that is straddled by a genre film which is a lot of faces and anger.)

Charles Sturgis (Victor Mature) is an FBI agent based in New York. Charles sister was murdered by a drug kingpin monster Frank McNally (Trevor Howard), who seems to have escaped from the grasp of the police. Then information comes in about his location. So now Charles is on the trail of said monsters drug smuggling operation. Crossing the Atlantic and looking under every rock in the Continent. Frank is unhinged, literally he will kill anyone to get his goods through unchallenged. He strangled Charles sister to death just for that and now he has his sights on the cop on a relentless pursuit of him. So who will win and who will lose?

PICK UP ALLEY could have been taken to the pit of film past and then left to slowly slip into said pit. Of past films. I could rail against this film and its rather sloppy use of convention and social issues but that would be unfair. Its really a case of British film trying (and half succeding in) making a try at the genre. The best part of the film (and the only piece I will focus on) is the direction. Tight images. Creative use of visual spaces. Tightened angles and a lovely flow of camera, action and structure. Handling like this is rare and sometimes it is excepitonal. I cant be anything but respectful of that. It really is struck with enough strength and conviction to make the piece work but also clever enough to work with visual depth and chiaroscuro lighting.