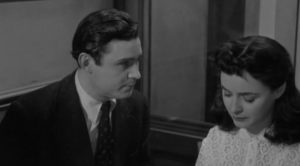 Post war films focused on the transition and trauma of Europe after the war. Films like THE THIRD MAN, tapped deeply into the fears of choas. During the 1950s and into the early 1960s, fears of nuclear conflict, repressive governments and secret organisations became the overwhelming focus. British cinema did begin to ask probing questions of the political landscape in Europe of the period. Sometimes it was positioned as a comedy, such as LEFT,RIGHT AND CENTRE. Other times it was more sardonic and took a satirical swipe, like HEAVENS ABOVE. The discourse was shaped, like everything, between the conflict betwen the declining empire and the rising American and Soviet ones. THE PRISONER is a harder edged and explosive part of this discourse. Based on Bridget Boland play, which she adapted for this script, it is about the battle between the two, as well as the product left over from this. 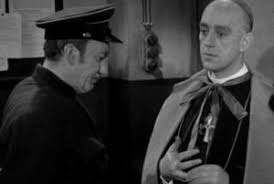 Set in post-World War II Europe, an unnamed cardinal (Alec Guinness) in an unnamed country is arrested at Mass and thrown in jail for treason. He is accused of vague plots and treason, then his Interrogator (Jack Hawkins) begins to unravel him. Subjected to an torture, from sleep deprevation to enforced interregation at any time of the day or night. He is questioned about his character. The intense degree of both physical and psychological pain, cause him issues of doubt and fear. Pain crosses into emptiness and he is mocked by his captors. The Interrogator uses every tool at his disposal. Every game is played. Every comment cut and cropped into false statements. Recorded by microphones, hidden from sight. The government has to get the strong-willed prisoner to issue a statement against his own interests. They need him to smear his flock. He must renounce his role and lessen the challenge of religion in society. 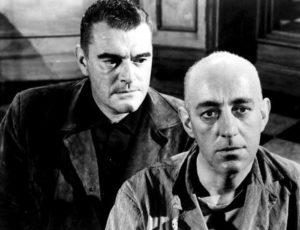 THE PRISONER is a hard sell for some. It has been called a ‘filmed play’, stagey and cold. It has been critized for its direction, which has been called hard, slow and rigid. It was also accused of being both anti religious and anti communist, which defies belief of either kind. Where some of the above has come from is directly related to Peter Glenville as a director. He was better known for directing on the stage than for the screen. He favoured character over cinematic tradition and for some of his best work, you have to see past his direction. He favoured strict and contained performance (much like the action). 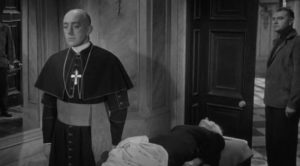 Glenville crafts a mediated film which  not only looks at the political but also the form of film. It is richer when it plays to stage mechanics. It never needs to lift the piece completely away from the the charcters to develop the narrative and as such the location is ideal. This is why two actors like Guiness and Hawkins were drafted in. Both are subtle, nuanced actors that understood theatre and film. Each joust with the other through intellect over force. Both allow the direction and the topic to breath. This is why the restaint. Acting is about control. The film is about the power of control on us all. 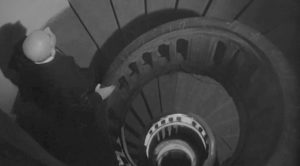 The 1080p has some visible wear. Which is never too hurtful to the image. It is however not ideal for the earlier scenes.

Not many is the answer. Interrogating Guinness is the best extra. Neil Sinyard talks the life of a man, through religious shifts and ideological concerns. Philip Kemp should have completed a total commentary. The lack of an over arching discourse hampers the execution and retention.

filmed play (which is half true)

Its a piece where are focus is not on the whole  But these criticism pail against the power of the film.  are not central to the films performances. Guiness is brill never shys away from exploring the power of control. This in the end is what many feared. The state