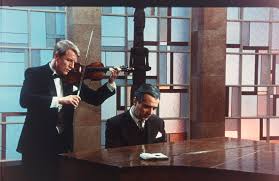 Alain Resnais was something of a cinematic marvel. Resnais was known as one of the architects of the French New Wave, directed two astonishing films HIROSHIMA MON AMOR (1959) and LAST YEAR AT MARIENBAD (1961) (I will only be using the English titles of any films as I always do). MELO (1986) was from his later work with actor Fanny Ardant. Its an  adaptation of Henri Bernstein 1929 play and it gets a lot right. From its stunning sets, theatrical mise en scene and gliding cameras. Although if we are honest it is a blending of theatre artifice and film form that fails to compel the viewer beyond both forms limitations. 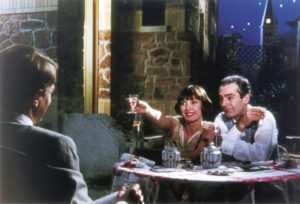 1920s Paris. Pierre Belcroix (Pierre Arditi)and Marcel Blanc (André Dussollier) are violinists and best friends. Pierre is happily married to Romaine (Sabine Azéma). Marcel however has never been in love. He has become famous above Pierre’s simple artistry. He has become financially stable and is now in love with her. Romaine and Marcel carry on an affair with Marcel, even as Pierre begins to fall ill. Is there more to this illness? Does she plan to do something to him? What is it that they both want from this relationship?

The only place to really discuss this film is where Jonathan Romney starts in his introduction. He is far more intelligent in his argument but I will be more blunt. The film has its textures far away from the earlier (and frankly preferred by me) films. That was where Resnais made film work for his ideas. Now in MELO, he seems to want to make theatre work for film. 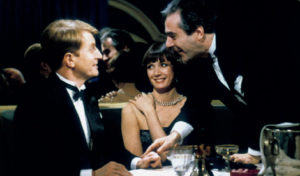 This often works. Resnais MELO is beautifully realised, directed with subtle skill and has sublime performances that tease points out for the audience.  My only issue is that it is stuck in a no mans land of being neither one or the other. What Lars Von Trier DOGVILLE did was force the viewer to take a position but MELO is not forcing us. I am not sure why but it lessens the films impact. 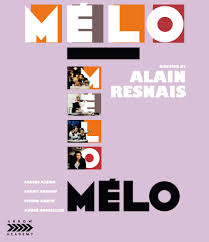 Compare the DVD from Tartan to this and you can see at least how the 2K has warmed the image. It has also missed that colour issue from before, with a slight haze over the image.

I did not get a chance to read the booklet (as it was not supplied) but I loved the critic Jonathan Romney. This is the best starting point. A point that will be fresh for fans of Resnais and not heavy for newly introduced types.