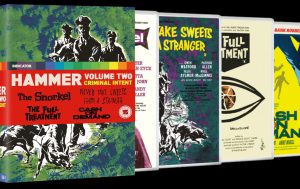 Another exemplary set from those fine films aficionados at indicator prove tr hey are the agenda setters in the race for Blu rays future. Powerhouse films have set out to ‘rediscover’ forgotten gems from the deeply rich vein of Hammers catalogue, owned by Colombia. The first set explored films from the horror canon. It included underrated gems and underexposed monster features that revisited some of those subtext rich myths. I reviewed these the back end of last year. This set, looks another way.  Focusing instead on the then popular crime and thriller genres. Four Hammer films from the studios illustrious middle period populate this set. From the taut robbery drama CASH ON DEMAND (Quentin Lawrence, 1961). To the deeply dark murder mystery thriller  THE SNORKEL (Guy Green, 1958). To the powerful child abuse drama  NEVER TAKE SWEETS FROM A STRANGER (Cyril Frankel, 1960) and finally ending with the racing driver psychological thriller THE FULL TREATMENT (Val Guest, 1960). The set is filled with 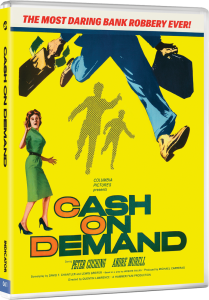 CASH ON DEMAND (Quentin Lawrence, 1961) sees mean spirited bank manager Harry Fordyce (Peter Cushing), he is highly strung and harsh but underneath this is a soft shell. However he is forced into a corner when a bogus insurance adjuster calls and his life is turned upside down. For those who know this is the film of folklore in Hammer circles. A crime thriller that heralded a new avenue for Cushing. It is also the best film in the set, just. It is a tense thriller which ebbs and flows with a skill and tenderness of touch. The credit for me it all in the seat with director Lawrence. Firstly its in the tension built via framing, pace and subtle scene movements. This is not learnt it is natural. A great combination of mood and mode. It goes hand in hand with another skill. Secondly the composition of every scene. The balance of framing of a image and how it manages the scene, still maintaining the tension and tone inside it. The third and most important is the skill of tapping into Cushing acting range. Cushing best performances were driven from his ability to be both harsh tongued and soul touching innocent. He can engage and endear with little more than a slight gesture. EXTRAS The HD transfer is lovely and silk like on the screen. Black and white have depth and rich cinematography is complimented. It has wonderful depth and looks stunning. I saw an American DVD version that was good but this is a substantial step up. The extras are all superb for this but the stand out are Jonathan Rigby and David Miller commentary. Keeping the film as event, entertainment and insight into its makers. It is informative and reveals the two as interesting and interested. A rare skill indeed it would seem, from people in the industry that is becoming the commentary circuit. 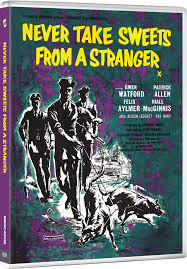 NEVER TAKE SWEETS FROM A STRANGER (Cyril Frankel, 1960)is one of the most explosives films released in the era. When a family move to the back waters in Canada, so Peter ( Patrick Allen) can work at a school, it seems idyllic. Then his daughter Jean is playing and her friends suggests that they get sweets from an old man in a mansion. Little did they know their lives would change forever. This sadly might just be the film everyone should have seen but didn’t. A frankly bold take on child abuse and society. It was censored on release and an outcry reduced its exposure both nationally and internationally. The press it seems rallied against it. When you see it, you can still see why. It feels fresh. It feels potent. It feels honest. It also feels even handed and that is rare indeed. The lack of distance is one reason for this. Placing emotion at the front of the screen. Placing the fragile innocence of the children, face to face with the cold world of adulthood. It shows the problem still at the centre of the issue. Class and social fears of what might happen to those who find out and what society thinks of the sins of the parent for letting it happen. It might have been a wholesale change in the public rational toward these crimes if this film had been widely seen. I wonder at the power this film could have held if society had been brave and stood up to listen to this film instead of shout it down with calls of offence or maybe we just want evils to be dark and not rich and affluent. EXTRAS The transfer looks stunning but I have little to compare it to. The trailer from years past looked grubby but is little to go on. As for the best feature? Its the interview with Janina Faye. Not to spoil it but the experience of making the film seems to have created quite a world for her. The power of the film should not be lost when she recounts the innocence of the young people who were performing. 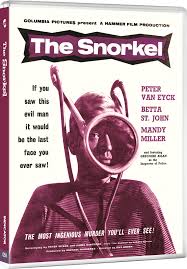 THE SNORKEL (Guy Green, 1958) opens the set and sees the devious Paul Decker (Peter Van Eyck) murder his wife and make it look like a suicide. The only snag is that his daughter in law knows he did it. After all he also killed her father right in front of her. The new husband murders his rich wife after killing his competition (ie her original husband). Seen it before? Yes but here it has an edge. Forget the revenging step daughter. We know that she knows it was him. The power of The Snorkel is that it not only explores the fear of the deepest evil in a relationship but it reveals the power this has in the imagination. The power of a creeping, lurking fear. A thriller lives or dies on its ability to maintain tension. Here it holds onto the play between evil step father and fear for her life step daughter. She is wonderful as the knowing child that is ignored until step by step she unravels his game. He is excellent as the evil creature that kills without remorse and plays a battle of wits with menace and cool calm evil. Its a feast of acting and suspense with a well written script and very consistent directing from Green. It might not hold always as it heads to its climax but it holds enough to make it worth watching. EXTRAS The transfer is a massive improvement on the DVD version. That had wear and warp but this has a crisp feel that is clean and lovely. It also keeps the sound in check as well. The best feature on the disc bar none is the audio commentary with film historian Michael Brooke and author Johnny Mains on The Snorkel. Brooke is a very informed film historian and critic. Mains is a great author and both create the surrounds of this film to perfection. 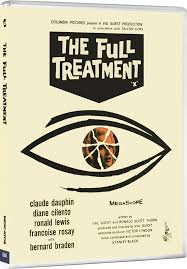 THE FULL TREATMENT (Val Guest, 1960) sees racing car driver Alan Colby (Ronald Lewis ) suffer a nasty accident. This seems to change him from a middle mannered thrill seeker into a monster. He repeatedly tries to escape from diagnosis but why? The problem with Full Treatment was simple. It is a labour of a film.  I wouldn’t start here but if you do the rest of the set excels. It cant be said that Full Treatment is not a film with a solid central conceit its just that it fails to do what is needed. It examines the effect of pain on the self. The effect on the mind of trauma. Doing so without reserve. However, it just lacked the solid central performance required, the defined script or the motivation of people in such an event. Its not Hammers best film. It twists and turns are often expected and feel empty at the conclusion. A case of done better, later and without such machinations shifts and dips. It meanders on the topic of fear and flips from psychological thriller to melodrama. With that lack of delicacy in narrative execution. That overt male menance that verges on schizophrenia, from loving newly married man to nasty misogynist and murderer. EXTRAS I gave up… 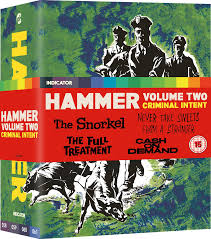