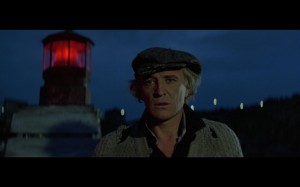 First of all, it has to be said, that Orca – The Killer Whale is one of the stupidest films ever made. Legendary producer Dino De Laurentiis was involved with some great work during his lifetime but he is also partly responsible for some stinkers, a lot of which get away with it due to their B-movie status. This is the case with Orca – The Killer Whale. I even disagree with the premise that Orcas are aggressive killers when it comes to humans so it was hardly a good start. Yet it is impossible to hate this movie, the way it is impossible to hate a monkey wearing a shoe as a hat. He doesn’t quite get the way it is supposed to be but it’s nice that he is trying and his attempt is damn funny.

Brace yourself for the dumbest plot synopsis in film history. Rogue Irish fisherman Nolan (Richard Harris) is hunting a shark off the coast of Canada, hoping to make enough money catching a live animal to pay off his boat’s mortgage and return to his native land. He turns his attention to a pod of Orcas that arrive in the area, even though the beautiful marine expert Rachel (Charlotte Rampling) has warned him against it. As he attempts to harpoon the male Orca he misses and, tragically, spears the pregnant female of the pod, which then tries to kill itself by crashing into the boats motors. They winch the dying female out of the water only for the foetus to burst forth like the xenomorph from Alien. Once Nolan gets the unborn whale off the deck of his boat his eyes meet those of the male Orca still swimming next to the boat. The whale roars like a lion and the story of its vengeance begins.

Hot on the heels of Jaws, Orca is just one of a slew of films made to mirror the water bound fear and suspense offered by Steven 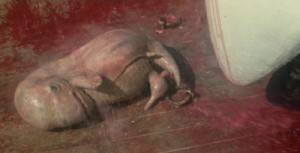 Spielberg’s classic. Yet the idea that an Orca could be consumed by revenge and wreak havoc on a small town, which is of course on land, is not something found in Spielberg’s work. Richard Harris and Charlotte Rampling are both great actors that add at least a bit of passion to the project but the only entertainment found here is laughing at the increasingly ridiculous plot.

Right from the beginning, which looks like the TV advertisement for a marine park, there are laughs. Rampling’s haughty scientist gives a college lecture on Orcas, highlighting their capacity for vengeance and how they are the most powerful, intelligent creatures on the planet. This helps set up the tale of retribution, it’s backed up by science after all. There is even time for a

superb stereotypical part from Will Sampson as an all knowing Native American who tells of his ancestors and their encounters will the vengeful whales.

The cherry on top may be when the whale manages to blow up the town and set fire to much of it. Understandably ecstatic with this accomplishment, quite amazing considering the water bound nature of the animal, the whale jumps for joy in the harbour, success has obviously gone to his head. Forget the pathos found in Nolan as he tells Rachel that he understands the whale’s reaction as he lost his own wife. You could say that the film is an allegory of man’s impact on the world but that is a touch far-fetched. Taking Orca on its merits as a ridiculous B-movie romp is watching it the way nature intended.