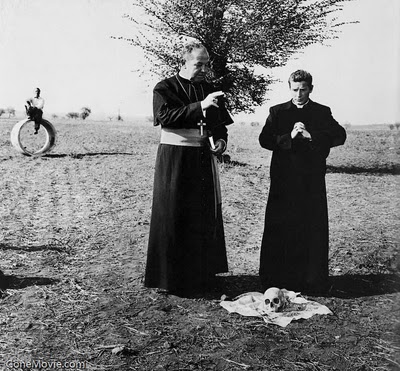 Not much less than 8 1/2years before Federico Fellini’s most revered work came his blackly comic tale of morality Il Bidone (The Swindle). Though it is an occasionally light-hearted affair, this follow-up to his breakthrough film La Strada is an intensely analytical piece, exploring the depths of human guilt and highlighting the great divisions in post war Italy. The centrepiece of Fellini’s Trilogy of Loneliness, Il Bidone is yet another tour de force uncovered by the Masters of Cinema series, one that deserves far more consideration and adoration than it currently receives.

The darkly humourous inflections are delivered impeccably by the whole cast but it is Broderick Crawford who ultimately steals the show. He plays Augusto, a fifty year old conman who prays on the poor and easily swayed masses in the countryside. He has partners in crime, the naive and optimistic “Picasso” (Richard Basehart) and the slick and ruthless Roberto (Franco Fabrizi). These two act as the perfect triggers for the growing awareness of integrity and futility brewing in Augusto, especially after he is reunited with his daughter and discovers the repercussions of his work take their toll on any relationship he may wish to foster.

Roberto’s taunting hints at the insecurity of the darkness in which the gang operate and the fresh faced sanguinity of Picasso and his dreams of happy family life disturb Augusto’s contentment. It will take the success and subsequent apathy of an old friend however to slam home the depressing state in which Augusto finds himself. His life revolves around relieving country folk of carelessly scrapped together bundles of currency, paper they are almost indifferent to in their search for real material needs, stressing the great gap 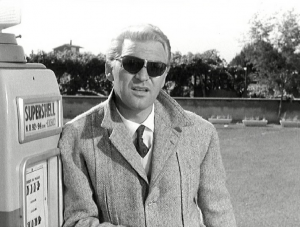 between city and countryside.

Rural Italy is a place of rare beauty but Fellini insists of painting a bleak picture focusing on old, neglected buildings. He utilises sparse rooms when Augusto has dealings in the countryside but shows off the opulence of a lounge room in Rome. The settings are as important as what is said in them. Fellini enjoys wide views of locations as much as tight gazes at faces when analysing his characters.

This masterful display of direction comes into full force in Il Bidone’s penultimate set piece. Faced with stealing a handsome sum from an ageing family supporting a crippled daughter poses Augusto a monumental dilemma. His stoic professionalism teeters on the brink of collapse when confronted with the girl’s unflinching hopefulness and gratitude for the life she has. Seeing him dressed as a priest she begs for blessing before a unique moment of humanity causes Augusto to scold her, “You don’t need me, and I have nothing to give you”. It is possible he is on the verge of being saved but a life of ease supplied by the pockets of the gullible poor isn’t an easy choice as Fellini gives no perfect solutions to Augusto’s struggle for morality and livelihood.

Il Bidone is released on DVD and Blu-Ray on the 30th December courtesy of the Masters of Cinema series.