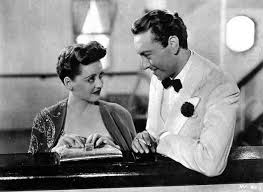 1942 is a year in film that has much worthwhile to talk about. Yes it is the common expectation that 1939 is a more significant year. in fact what a year it was for Hollywood. Its greatest so we are told. Well so the film critical mass once said and of course once thought. Now you are as likely to hear years like 1969, 1977, 1994 or even 1999. I lived through 2  of them. both were exceptional years. All the others were good but none of them had THE WIZARD OF OZ, GONE WITH THE WIND, THE GRAPES OF WRATH, STAGECOACH and DARK VICTORY. 2 years later, 1942 and you had an equally great year. CITIZEN KANE, THE MALTEASE FALCON, HOW GREEN WAS MY VALLEY and then NOW VOYAGER. All films have their myriad qualities. NOW VOYAGER however is a melodrama that played on Bette Davis previous hit, DARK VICTORY. However this seemingly took on the baggage of the bitchness that underpinned Davis best work (in the same year THE LITTLE FOXES came out and that is not only a masterpiece, it is a study in her talents. 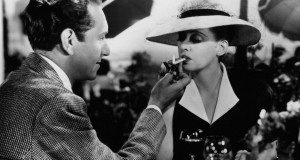 Charlotte Vale (Davis) is dull and drab. She is unmarried and dominanted by her mother. This has removed any sense of self confidence in her weary body.  Mrs. Vale sees Charlotte as supplement to requirement. Three sons have come before. Charlotte sister-in-law Lisa introduces her to psychiatrist Dr. Jaquith, who recommends that she spend time in his sanitarium. Charlotte blossoms, and Lisa pushes her to become something else. She is transformed and to underline her new self, she takes a lengthy cruise instead of going home immediately. On the ship, she meets Jeremiah Duvaux Durrance (Paul Henreid). He is married and traveling with his friends Deb and Frank McIntyre. From them, Charlotte learns of how Jerry’s devotion to his young daughter Tina, has left him in a loveless marriage. The future is unclear but at some point she will try to make her life better…with him. 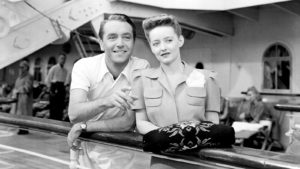 Right, this is the sort of film which has major fans and was obsessed over in the dawn of film studies. Why? Well then it was seen as womans films and that they would have been loaded with subtext and histronics. The woman as an agent without agency. The social entrapment of marraige and the social release of it too. Bette Davis as a lighthouse of acting, winner awards for playing bitches. Well it seemed that William Wyler was a fan of her in this way. A fan who exploited her for cinema’s gain. Also being seen as the spinster who would always have things dumped on her. I am not a fan in the conventional sense of the word. The 1950s melodramas, have social commentary and punch, the 40s saw films that were high on production but also on glycerin. If you have watched Hindi (and some regional cinema) cinema, it is a step away from this but not so far as to be absurdly connected. 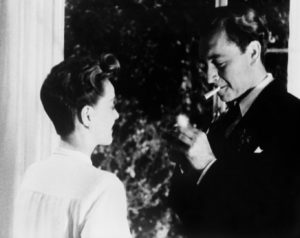 The film is packed with far more interesting content then above. The 4K transfer however I have a lot to say. The version that was in the vaults has been kept glouriously clean. The print has not overly benefitted from the ramping up. Contrast aside, it is not massively different from the DVD. I know. It is not. I mean this with respect but the DVD version was good enough to last. The extras are focused on chatter. Davis on The Dick Cavett Show is the best. Funny, witty, pithy. She also knows what we want and tells us. Interview with Paul Henreid lacks some of that charm because Henreid was never fully sold on the whole English language limitations.