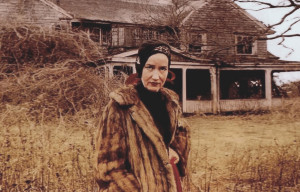 The American home entertainment market has been the subject of envy for those of us positioned on the other side of the Atlantic for some time. Why, you may ask? Well, for the simple reason that they have had access to any self-respecting cineaste’s favourite companion: Criterion’s rather snappily titled Criterion Collection. Packed with flattering extras on carefully presented Blu Ray and DVDs, they frequently succeed in showing off the good and the great of cinema’s canon with due care and unbridled affection.

The good news to report is that envy need no longer be present. Finally, the series is being launched in the UK, and in the first wave of titles comes this cult, oft-parodied little gem of a documentary. In fact, the rather peculiar Grey Gardens arrives with some considerable notoriety and heaps of praise, having been voted into the top ten of Sight and Sound Magazine’s 2014 poll on the top documentaries of all time (tying in 9th place with D.A. Pennebaker’s Dylan film, ‘Don’t Look Back’). Truth be told; it is a study in the eccentric and bizarre. It’s more camp than an evening with Julian Clary and bristling with more joie de vivre than a sing-along Grease screening.

Directed by the Gimme Shelter directorial pair, David and Albert Maysles, focus is on the dilapidated residence of Edith Bouvier Beale (a woman nearing 80 years of age) and her daughter, Edie. The family are the connected to high society; being the aunt and cousin, respectively, of former US First Lady, Jaqueline Kennedy Onassis. Their abode is the sprawling estate, Grey Gardens, and it is one that has fallen into increasing squalor and a state of disrepair.

During the course of the film, Edie, proves to be charismatic and armed with a unique sense of fashion. Edie’s interactions with her mother are fascinating, as a glimpse of a life cocooned in a reclusive bubble predominates. Amongst the good humoured routines of songs being sung and their volatile and voluble petty squabbles, the universally recognisable ties of affection between a mother and daughter break through.

The women address the camera, talking over each other, moving from the present to events years before. There are even hints that Edie came home 24 years before to be cared for rather than to care for her mother. It might be fair to say that the mood and subject of Grey Gardens has a certain select appeal, but it is a landmark documentary worthy of its many accolades.