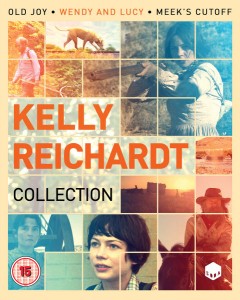 Kelly Reichardt’s latest Night Moves, a taut old-fashioned thriller taking on a modern subject, follows three eco-terrorists as they plot to dock the titular boat – laden with explosives – alongside an iPad powering mega damn. If the execution of the scheme is a compelling tour-de-force in ratcheting tension, the drama really lies in the after-ripples, as Jessie Eisenberg struggles to keep a grip on the motivations and the mouth of Dakota Fanning’s repentant rich girl, rapidly unraveling with guilt, whilst all the while maintaining a mask of innocence on that glorious guarded face of his. Eisenberg’s incendiary performance powers a film that confirms its director’s status as one of this generation’s most probing and on-the-button filmmakers.

In the wake of its launch, Soda Pictures has released the Kelly Reichardt Collection on DVD and Blu-Ray. The three film set (Old Joy, Wendy and Lucy and Meek’s Cutoff) reveal the director to be an uncanny chronicler of contemporary America. With each set in remote Oregon (home of frequent collaborator and writing partner Jonathan Raymond, whose short stories are lovingly included within the bonus material), the collection eschews Hollywood’s preoccupation with those with what Fanning’s Night Moves character labels ‘media jobs in New York City’, and instead focuses on the lives of ordinary, struggling Oregonians. And boy, do the good folk of Beaver State have it tough… Yet on a wider scale Reichardt’s work is a patient re-contextualizing of the entire country and its traditions – films which hark back to the old glorified ways (groups around the camp fire, travelling up country on a freight train, and friends firing pistols at tin cans), and place it in a gloomy here and now. Get past the somber decay of the (Big Capital Letters) American Dream however, and there are treasures to be found.

Wendy and Lucy (2008) is the clear highlight. Narrative-wise, there is little to it than ‘Woman loses dog. Woman looks for dog while trying to get her car fixed 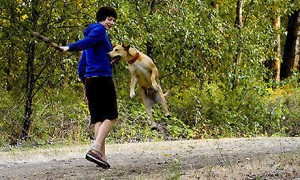 at a reasonable price.’ Yet in a collection filled with displaced Americans, William’s Wendy is the most moving. The actress is sensational – easily matching her Oscar-nominated turn in the similarly bleak indie Blue Valentine. Travelling up to Alaska, accompanied by nothing but a battered car, a boot filled with photographs, and a canine-companion, her journey stalls in a sparse Oregon town. The peril of her situation, while seemingly small-fry in a fiery world of Michael Bay robo-plosions, are stark (‘Can’t get an address without an address. Can’t get a job without a job’), and as William’s masterfully veers from a controlled detachment from her homelessness, to a visceral reaction at the loss of Lucy, Reichardt makes clear that here is a very real life on the line. The fact that the dog finds a home quicker than its owner, rings painfully true as a particularly damning piece of social commentary.

In the filmmaker’s continued study into the States’ state of mind, it’s no surprise that she chose to interpret its defining genre with Western Meek’s Cutoff (2011). Chronicling the trials of a group of settlers led by enigmatic cowboy/charlatan Stephen Meek, they must decide whether to put their faith in their guide or follow the will of their Native American captive. With water drying up, tempers frayed, and satnav frustratingly unavailable, they have no way of knowing whether they’re marching to salvation or into a trap. 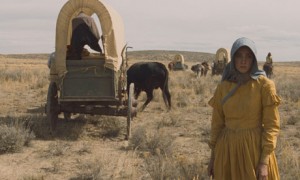 There’s much to admire in Meek. The cinematography is excellent, and, bravely shot in 4:3, we are every bit as restricted in our sense of space and place as the settlers. The film’s staunch realism, and commitment to presenting events largely from a female viewpoint – a perspective almost unique in the genre – are rewarded with strong performances. Michelle Williams, reunited with Reinhardt, is just knock-out once more. However, unless you happened to be stuck on an equally long trip in the back of a wagon pimped out with Blu-Ray player, it’s difficult in all honestly to recommend the film. There are passages every bit as long and arduous as the characters own journey. While it feels disingenuous to call a film that does so much so well a swing and a miss, there are enough recent examples (The Assassination of Jessie James By The Coward Robert Ford, 3.10 To Yuma, There Will Be Blood) to show that a modern ‘western’ should be capable of being both elegiac and entertaining.

Which brings us to Old Joy, which does in fact do both. A slice of lo-fi Americana soundtracked by masters of the (musical) genre Yo La Tengo, the film is a gentle ode to joy, yes, but also a slow study in suburban longing, repressed desires, disappointment, and disappointing friendship. Smoking pot and clinging on to past memories, Kurt and Mark (the excellent Will Oldham and Daniel London) are old pals with the good times long behind them, stuck in holding patterns, and hoping that a trip back to nature might hold the key to getting back what they once were. Reichardt isn’t that kind of director however, and it is ultimately clear that while the pair might be able to leave, they aren’t ever really going to make it out of the woods. In a film of long pauses – stretches where you will be convinced that you’ve sat on the mute button – the temporary escape from the white noise of modern life is the only way in which either will find peace.

In a collection filled with the seeking of destinations and end-points, where the optimistic American traveler has become the drifter, these imperfect yet hypnotic films are ripe for getting lost in.  Like the forests of Oregon, the work of this singular filmmaker is well worth an exploration.

Night Moves and The Kelly Reichardt Collection is out now.