The depiction of an urban environment as a hellish pit of amoral, dog-eat-dog savagery is one well worn by filmmakers of every era. Metro Manila, made by British director Sean Ellis (Cashback, The Broken) working in a language he doesn’t understand, is a crime thriller very much in this vein. 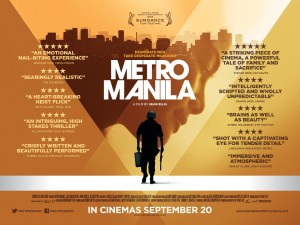 In an odd titling decision, the city in this instance gives the film its name – if Ellis had chosen an American setting it seems unlikely that he would have called it New York City. A facetious point perhaps, but one that arguably goes some way to explaining the absence of much nuance in the depiction of Manila and its people.

Oscar Ramirez (Jake Macapagal) and his young family are forced to move to the Filipino capital from the idyllic countryside in search of gainful employment. Upon arrival in Manila, Oscar is quickly swindled out of all his money and the family are forced into settling in the crime infested slums. Finding work hard to come by, Oscar takes a hazardous job as an armoured truck driver whilst his wife, Mai (Althea Vega), finds work in a strip club.

Metro Manila’s opening scenes set the film up as a heart-wrenching family melodrama, as the Ramirez family’s problems quickly escalate. The melodrama of Vittorio De Sica’s Bicycle Thieves, in which a crowd of men gathers waiting for offers of day-to-day menial employment is nicely evoked. Ellis generates considerable sympathy for the family, embodied in particular by Oscar’s young daughter, who constantly clings to the legs of her parents as she watches the bleakness mount up before them.

As the film continues however, it moves away from emotional drama towards a conventional crime thriller narrative with a blueprint cast of criminal characters. Its attempts to address overt misogyny as a component part of Manila’s hellish dystopia feels somewhat shallow, especially the relative lack of attention paid to the subplot involving Mai’s work as a dancer for sleazy western men.

Made from an outsider’s perspective, Ellis’s lack of texture in his portrayal of urban Manila makes you doubt its veracity. The early promise of a heart-wrenching fable sadly fades as the Metro Manila trips over its increasingly generic plot, ending up being a curious oddity rather than a small scale gem.