John Turturro’s Fading Gigolo is one of the underrated treasures of the year; carefully mixing comedy, drama and romance into a beautiful, delicate and laugh out loud package. Fading Gigolo takes a leaf out of early Woody Allen and is a great antidote to heavy handed romantic comedies that seem to be released week after week.

Alongside Turturro, who stars as Fioravante (as well as writing and directing the film), is the incredibly funny and always refreshing Woody Allen, who plays his confidant of sorts, Murray. The rest of the casting is just as skilful with Sharon Stone in a very seductive role (which obviously calls upon her Basic Instinct days), Sofía Vergara, Live Schreiber and Vanessa Paradis in one of her most exciting and interesting roles to date.

Murray’s bookshop, which has been in his family for generations is closing, he couldn’t make it work and so along with Fioravante, finds himself out of work. But when his dermatologist, Dr Parker (Stone) tells him that she dreams of having a ménage à trois with a male prostitute and her friend, Selima (Vergara), he takes it upon himself to offer out Fioravante and assumes the role of pimp as a quick money making scheme. Of course if one woman tries out the man, she is bound to tell her friends and quickly Fioravante becomes the flavour of the month with the lonely and wealthy women of the city and he starts to make a good money quickly.

Othella (Tonya Pinkins) and her children live with Murray, but when they find themselves attacked by nits, he takes them to the Hassidic Jewish area to a 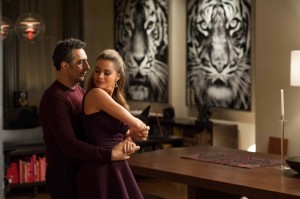 women called Avigal (Paradis), who can treat the children. Her husband, a rabbi from the area, had died two years before and since then her whole life has been looking after her house, her children and keeping up appearances for those outside. She has never at one point strayed away from the rules of her religion and never has she considered a relationship with another man. Murray talks about the treatments that Fioravante can provide, he can massage her and make her feel renewed just from having contact with another adult.

Oddly she accepts his proposal and carefully visits Fioravante; their chemistry is recognisable from the very start and he starts to bring out intimate feelings in her that she had forgotten existed. When he starts to undress her back on the message table and moves his hands subtly across her skin, it brings her to tears and she states that it is because she hasn’t been touched by another man since her husband died. Slowly she composes herself but this experience makes her realise that something has been unleashed in her and she doesn’t necessarily want to bottle it back up again. 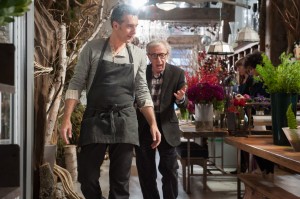 At the same time as this, a local security guard in the Jewish area, Dovi (Schreiber) starts to worry about why she is so frequently visiting the city. It turns out they have known each other since they were much younger and he has always harboured an unrequited love for her. But out of respect to the rabbi, has never acted upon his feelings, instead just quietly watching from a distance. As the intimacy and passion slowly grows between Avigal and Fioravante, Dovi becomes more and more engrossed in trying to work out what has happened. This culminates in the untimely kidnap of Murray, who is brought in front of the religious court with rabbis as judges who are trying to work out whether Murray has helped push Avigal into disrespecting herself in public. Fading Gigolo allows an interesting discussion around the Jewish culture of this area; from the ways in which women are treated but also the importance of the family itself. This is a brilliant representation, something rarely seen on the big screen, especially as it opens up a world that much of the audience may not be aware of.

Turturro’s decisions as filmmaker in Fading Gigolo are part of the reason for it’s greatness, his camera fully explores and becomes intimate with both his characters and the locations they find themselves in – the city becomes just as important as it holds the action.  The whole film also has a beautiful sepia tone, which seems to wash over the audience as the characters find themselves bathing in this romantic glow. The script is also great; scenes go from brilliant comedy (usually initiated by Allen) to the most warm and intimate of emotions – really allowing the audience to get to know the characters. The chemistry between each of the actors in the cast is also a highlight of the film – they all seem truly interested in the story and invested in their own parts.

Fading Gigolo is a wonderful kind of film, pushing the whole cast to give their best performances and highlighting their talent, whilst telling a worthwhile and funny story.