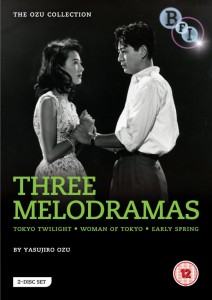 release the BFI have opted for. The master of subtlety and minutiae moves slickly into melodrama without losing any of his trademark serenity and masterful composure. They may be melodramas by name but this is melodrama the Ozu way, long pauses and reflective glances. He can say more with one frame of silence than many can with hundreds of frames of dialogue. Silent drama Women of Tokyo is joined by Early Spring and Tokyo Twilight in a DVD release that pays reverence to an old master.

Not for the casual fan but a release that will delight fans of Ozu, Japanese cinema and silent cinema. Women of Tokyo may be very different from Ozu’s work in the sound era but prevalent are the techniques he will use in later films. He constructs frames within frames showing his remarkable sense of space adding depth to otherwise flat scenes. His subtle style is present as there is none of the overacting associated with silent cinema; the actors excel in his tale of misunderstood sacrifice. Chikako (Yoshiko Okada) works very hard all day, every day to pay for her brother Ryoichi’s (Ureo Egawa) tuition. Ryoichi is perfectly happy with the situation until he learns of the true nature of some of Chikako’s work. The drama of this short 45 minute film unfolds as with normal melodramas but Ozu captures it more effectively. His characters face his camera head on, as a tear rolls from Ryoichi’s face he stares straight at you, allowing the viewer to access his emotion without the excess usually required in silent cinema and melodrama. The film was originally without a score but a score has been written especially for this release by Ed Hughes and the DVD gives the option to watch with or without. Watch it without. 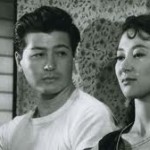 A dream like beginning as Kojun Saitô’s score sweeps across the introduction to the world of work and social activities of the people of Tokyo. Ozu’s Early Spring follows the life of young salaried worker Shoji (Ryu Ikebe) and his wife Masako (Chikage Awashima) as they deal with the difficulties of balancing their marriage with Shoji’s work and social engagements. The two have struggled through a tragic event and are dealing with it separately causing their marriage bonds to strain. Fellow worker ‘Goldfish’ (Keiko Kishi) begins to show an interest in Shoji causing the bonds to begin to tear.

Made in 1957, just after his celebrated Tokyo Story, Ozu fills every frame full of detail. When the camera returns to the same shot there is still much to absorb, his long takes never bore. As Shoji and Masako appear to live two different lives the melodrama plays out with Ozu subtly driving a wedge between them. The disparate couple enjoy some deliciously metaphorical dialogue as does the office flirt who is dividing them, shattering their fragile peace. As the dark themes of suffering and coming to terms with loss separate the two main characters, the same pain must bring them together.

Ozu had a busy year in 1957 as he also completed Tokyo Twilight in the same year as Tokyo Story and Early Spring. This film is 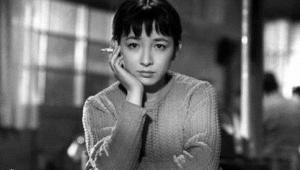 another brilliantly subtle melodrama exploring the themes of abandonment and what that means for identity. Sisters Akiko (Ineko Arima) and Takako (Setsuko Hara) were abandoned by their mother at an early age and live with their father Shukichi (Chishû Ryû). The younger of the two sisters, Akiko, gets into trouble and instead of turning to her family for the help they could so easily provide she turns away from them.

Ozu unleashes his favourite actor Chishû Ryû and with amazing effect. His acting is honest and simple; the director’s face-on style allows Ryû to hint at restraint and delicate emotion. He is a father of daughters trying to cope without a wife. He is missing a simple connection with his daughters; their femininity seems foreign to him so he becomes angry when sympathy is needed. A superb feature that delves into the depths of what connects us; Ryû and Hara are on top form as they try to convince the young Akiko to come back into the fold.