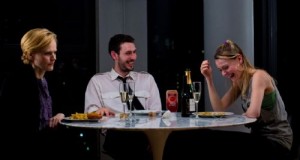 What was the likelihood that The Inbetweeners star, Blake Harrison and one of the most under appreciated British actresses of today, Maxine Peake, end up a British psychological thriller together? However likely or unlikely, the final result is a dark, moody, shattering thriller, which takes hold from the very first shot and doesn’t give up until long after the credits are over.

Directed by Steve Reeves in his feature debut and based upon a short film of his own, Keeping Rosy, follows Peake as Charlotte, a high flying media executive who has an expensive new flat in the middle of London. She has no one else to care for and likes it that way, but when Charlotte’s life quickly spirals out of control and crumbles, she has to quickly think on her feet or find her entire world will fall away from her. This stylish and glamorous looking film starts with Charlotte waking and getting ready for her day; she works out, she washes and leaves for her job in the city but she finds out that a colleague of her’s has become partner in the firm before her, the cracks very quickly start to show. Another colleague of her’s comes to the office with her new born baby, to show off to the rest of the office and in a wonderful set up, the audience learn that Charlotte isn’t a fan of children.

Things quickly turn when Charlotte’s boss lets her go from the firm and she storms out of the office in an angry rage. This seamless sequence is an example of Reeves’ expert skill; he juxtaposes the cooing from the others in the office around the new baby with the image of Charlotte gradually looking more anxious and angry through the glass in her office with her boss until she slams down and walks out. She returns to her flat, a space high above the city in a new complex (which indicates a sense of claustrophobia and being locked in) to her cleaner, Mykala (Elisa Lasowski) who is smoking in the flat despite being told never to do so. In a flurry of rage, she tells Mykala to get out and never to come back but after a moments thought, she realises that she was wrong and follows the cleaner into the hallway. Clearly Charlotte still isn’t thinking straight and accuses Mykala of stealing a bottle of champagne that she sees hanging from her bag, in these next moments Charlotte will do something that will change her life for ever.

The second half of Keeping Rosy is about Charlotte’s growing relationship with Mykala’s baby daughter, whom Charlotte names Rosy after discovering her 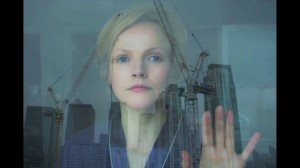 locked in the car park in the basement. Whilst initially she dislikes the child and cannot work out what to do with her, she grows to learn how to look after Rosy and even care for her – perhaps it is a sense of guilt or an inbuilt female sense of care, but she quickly adapts and makes things work. When Charlotte’s sister, Sarah (Christine Bottomley) comes to join with her daughter for the weekend, it seems that perhaps things may get back on track for Charlotte. She would have to change her life, move direction and decides to move back up North where she originally came from but when a body is discovered in the canal it seems this plan may not work out. Enter Roger (Harrison), a psychopathic security guard who knows Charlotte’s secret and threatens to tell everyone unless she gives him exactly what he wants.

The stunning and shocking ending adds to the power of the film, giving a wonderful full stop to this delicately written script.

Peake’s performance (as always) is brilliant, she is at the top of her game and as Charlotte is unforgettable. When she works with the baby, she manages to bring a balance between comedy, sadness and darkness. Whilst it could have been quite funny watching this women with little idea about babies try to work out what to do and at moments, it almost is, there is this overwhelming sense of confusion and pain in every movement of hers. It is not until she stands on the balcony of her flat with Rosy and meets her new neighbours that she relaxes into the role of mother. Her chemistry with Harrison manages to be both sensual and destructive, erotic and dangerous, adding several layers to the story. It is great to see a thriller being led by not just one but two very talented and capable females, it will hopefully be films like this that leave the door open for more dark and serious roles for leading ladies.

Keeping Rosy is one of the most satisfying and provocative British thrillers of the last decade, burrowing deep within the psyche of the audience. Aided by outstanding performances, a wonderfully paced script and some skilful directing, it is one to watch out for and watch over and over again.